‘This is total insanity,’ says father of detained Belarusian journalist 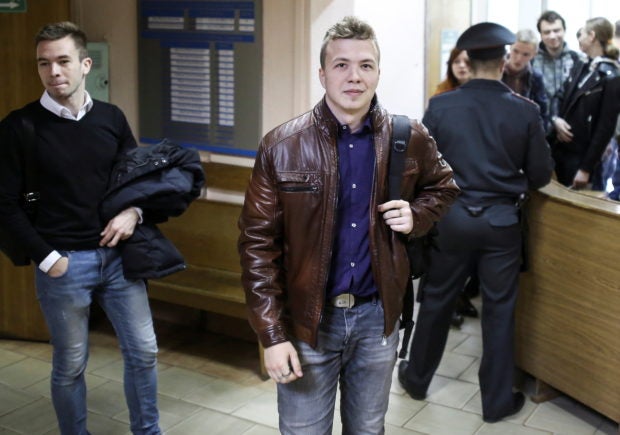 FILE PHOTO: Opposition blogger and activist Roman Protasevich, who is accused of participating in an unsanctioned protest at the Kuropaty preserve, arrives for a court hearing in Minsk, Belarus April 10, 2017. Picture taken April 10, 2017. REUTERS/Stringer

The father of dissident journalist Roman Protasevich, who was detained in Belarus after his plane was forced to land there, said he believes his son was forced in a video posted online to admit guilt and appeared to have a broken nose.

The Lithuania-based blogger and his female companion, Sofia Sapega, were both taken into custody after Belarus scrambled a warplane to intercept a Ryanair aircraft flying from Athens to Vilnius and divert it to Minsk on Sunday in an action condemned by the European Union and the United States.

His social media feed from exile has been one of the last remaining independent outlets for news about the country since a mass crackdown on dissent last year.

To his father, Dzmitry Protasevich, the video comments on Monday seemed to be a result of coercion.

“It’s likely his nose is broken because the shape of it has changed and there’s a lot of powder on it. All of the left side of his face has powder,” the elder Protasevich told Reuters in an interview in Russian late on Monday from Wroclaw, Poland, where he and his wife live.

“It’s not his words, it’s not his intonation of speech. He is acting very reserved and you can see he is nervous,” Protasevich said of his son. “And it’s not his pack of cigarettes on the table – he doesn’t smoke these. So I think he was forced.”

The father added: “My son cannot admit to creating the mass disorders, because he just didn’t do any such thing.”

Belarus’ Interior Ministry said Protasevich was being held in jail and had not complained of ill health.

The 27 national leaders of the European Union on Monday demanded the immediate release of Protasevich and Sapega, as well as an investigation by the International Civil Aviation Organization into the incident.

They also agreed to impose more sanctions on Belarus, called on their airlines to avoid Belarusian airspace, and authorized work to ban Belarusian airlines from European skies and airports, a spokesman said.

The EU, along with the United States, Britain and Canada had already imposed asset freezes and travel bans on almost 90 Belarusian officials, including President Alexander Lukashenko, following an August election that opponents and the West say was a sham.

The president has denied electoral fraud. Since the disputed vote, authorities have rounded up thousands of his opponents, with all major opposition figures now in jail or exile.

“We are surprised that the destiny of one person means a lot, that it is seen as valuable to the European Union,” Dzmitry Protasevich said. “This is something that is lost in Belarus.”

“I think what happened was an act of revenge, to enlighten others: Look what we can do,” he said. “This is total insanity, what is going on.”