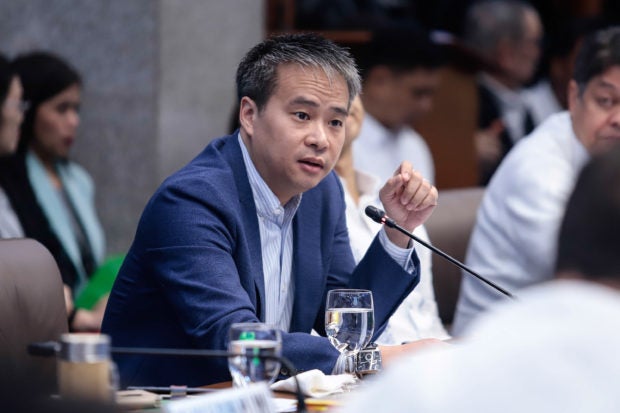 MANILA, Philippines — A bill seeking the creation of a separate department for migrant workers and overseas Filipinos has reached the Senate floor for plenary deliberations.

Senator Joel Villanueva, chairman of the Senate labor committee, on Tuesday, endorsed for plenary approval Senate Bill No. 2234 or the proposed Department of Migrant Workers and Overseas Filipinos Act.

The bill is contained under Committee Report No. 264, which is signed by 19 senators.

According to Villanueva, the new department would have an estimated budget amounting to P1.1 billion.

The new department is seen to serve as “one home” for migrant workers and Filipinos abroad since agencies mandated to provide service for them are scattered in different departments, Villanueva said.

“It’s not intentional that these offices and agencies are dispersed across departments, This is also a result of long experience with migration that has created policies, processes, and institutions that were expected to flourish under a collaborative governance regime,” he added.

Under the bill, the functions and mandate of the Philippine Overseas Employment Administration (POEA) will be absorbed by the proposed new department.

“The Department shall absorb all the functions and mandate of the Philippine Overseas Employment Administration and shall be the primary agency under the Executive Branch of the government tasked to protect the rights and promote the welfare of OFWs (overseas Filipino workers) and other OFs (overseas Filipinos),” the bill stated.

Further, the department is tasked to formulate, plan, coordinate, promote, administer, and implement policies, and undertake systems for regulating, managing, and monitoring the overseas employment of Filipino workers and the reintegration of OFWs as well as overseas Filipinos.

It shall also “promote the empowerment and protection of Filipinos working overseas by empowering and training them to gain appropriate skills and by ensuring access to continuous training and knowledge development,” according to the bill.

Aside from the POEA, seven other agencies under several different departments will be “merged and transferred” to the proposed department, which will now be tasked to “assume and perform all their powers and functions.”

Under the measure, a congressional oversight committee is tasked to conduct a systematic evaluation of the performance and organizational structure of the new department 10 years after its creation.

“Ten (10) years from the creation of this Department, the Congressional Oversight Committee may recommend the abolition of the Department should circumstances prove that there is no more need for its existence,” according to the bill.

“We are optimistic that there will be no more need for this department in the future that we included a sunset provision. We believe that 10 years is a reasonable amount of time to evaluate the need to overhaul or abolish the DMWOF should circumstances prove that its existence is no longer necessary,” Villanueva continued.

The senator underscored the need to create one department as he cited government data, which showed that around 6,092 Filipinos leave the country every day to work abroad before the COVID-19 pandemic.

He noted that five percent of all migrant workers globally are Filipinos, making the Philippines the country with the seventh-highest deployment of workers abroad.

“Despite their contributions to our economy and the love and respect they get from other countries and nationalities, problems continue to plague our overseas Filipinos, especially OFWs,” Villanueva said.

“While there are metrics for the economic returns of migration, there is none for its social costs. And the sad truth is that OFWs risk their limbs and lives abroad because of a lack of employment opportunities at home,” he added.