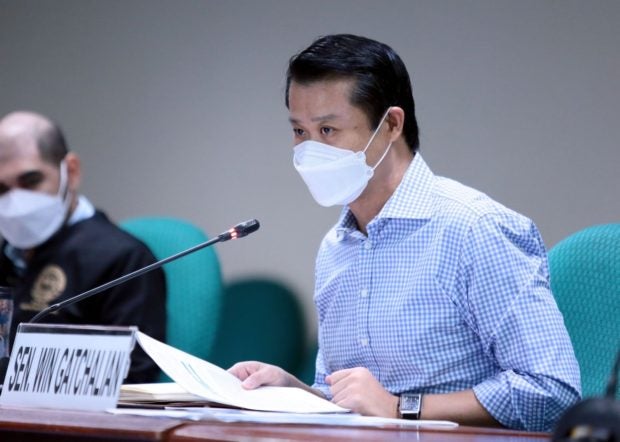 MANILA, Philippines — The general public or “anyone who is willing” should already be vaccinated against COVID-19 as early as June, Senator Sherwin Gatchalian said Tuesday.

“We’re now in our third month of our vaccination program and from my observation, it’s about time to move the general public up in the priority program as early as June,” Gatchalian said in an interview over ABS-CBN News Channel.

“So meaning, allowing the general public, anyone who is willing to take their vaccine, to be vaccinated as early as June,” he added.

According to Gatchalian, the country will have “more than enough” COVID-19 vaccine doses in its inventory by June to inoculate those who are willing to get vaccinated, at least those residing in the National Capital Region (NCR) Plus area.

He noted that the Philippines will have around 20 million vaccine doses by June.

“If you do the simple math, in NCR Plus, there are about 26 million in population and the clincher here is the recent SWS (Social Weather Stations) survey where it said that only 32 percent want to be vaccinated. The vaccine acceptance rate is only 32 percent. So if you multiply it [the population] by 32 percent, you get about eight million,” Gatchalian said.

“Eight million is less than the 21 million inventory, so we have more than enough to vaccine the willing people who want to be vaccinated,” he added.

Further, he pointed to the vaccine hesitancy among senior citizens, who are the second in the priority list of the government’s inoculation drive.

He said that in Valenzuela City, only 20 percent of the 58,000 seniors went out to get to be vaccinated.

“In Valenzuela we [did] house-to-house. We give the schedules to all 58,000 senior citizens and the reply that we get is ‘Ayaw namin magpa-vaccine, gusto namin ayuda’,” the senator said.

“And true enough, 20 percent of our senior citizens went out to get the vaccine, To wait for the 80 percent to go out, we’re [taking] time, it might take a while. While the rest of the public want to get their vaccines already. And to achieve herd immunity by the end of the year, we have to start with the willing, because they’re raring to go,” he added.

Vaccine czar Carlito Galvez earlier said that the vaccination of the general public is seen to begin by August once the supply of COVID-19 vaccines builds up.

Galvez said the government expects to finish vaccination for A1 (health care workers), A2 (senior citizens 60 years old and up) and A3 (comorbidities) by the beginning of July.

Meanwhile, President Rodrigo Duterte, last May 18, approved the proposal to expand the vaccination program to those under the A4 (economic frontliners) and A5 (indigent population) priority group.

Initially, the government was looking to start the inoculation of those under the A4 and A5  by June.

Gatchalian, meanwhile, underscored the need to allay the fears of the public regarding vaccination.

“My simple strategy is for the leaders to come out and promote vaccination. The top leaders, the President, the Vice President, Senate president, even the speaker of the House and even media personalities go out and promote,” the senator said.

“In my humble opinion… people trust their leaders, and if they see their leaders getting vaccinated and promoting vaccination, people will follow. At this time, the biggest hurdle that we have to overcome is fear of vaccines,” he added.

The proposal was first broached by Senator Joel Villanueva, who proposed that Duterte and Robredo come together in an advertisement for vaccination to boost public confidence and address vaccine hesitancy.