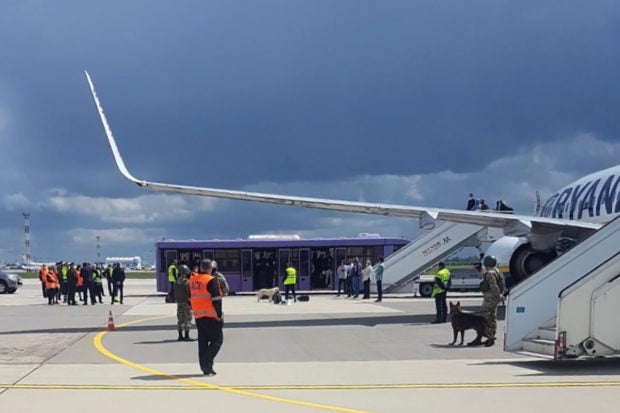 Airport personnel and security forces are seen on the tarmac in front of a Ryanair flight which was forced to land in Minsk, Belarus, May 23, 2021. Picture taken May 23, 2021. Handout via REUTERS

BRUSSELS — Western powers prepared to pile sanctions on Belarus and cut off its aviation links on Monday, furious after it scrambled a warplane to intercept a Ryanair aircraft and arrest a dissident journalist, an act one leader denounced as ‘state piracy’.

In a video posted online, the detained blogger Roman Protasevich, 26, said he was in good health, being held in a pretrial detention facility in Minsk, and acknowledged having played a role in organizing mass disturbances in the capital last year.

In the video on the Telegram messaging app, he wore a dark sweatshirt and clasped his hands tightly in front of him. The comments were immediately dismissed by his allies as having been made under duress.

A Polish deputy foreign minister, Pawel Jablonski, told private broadcaster TVN24 that his government had heard from Protasevich’s mother about his being in poor health but provided no details.

Belarus’s interior ministry said Protasevich was being held in jail and had not complained of ill health.

European Union leaders meeting in Brussels called for Belarusian airlines to be banned from the 27-nation bloc’s airspace and urged EU-based carriers to avoid flying over the former Soviet republic, according to a joint statement.

They also agreed to widen the list of Belarusian individuals they already sanction and called on the International Civil Aviation Organization (ICAO) to urgently investigate Belarus forcing a Ryanair plane to land in Minsk on a Greece-Lithuania flight on Sunday.

“The reaction should be swift and be severe,” Belgian Prime Minister Alexander de Croo told journalists ahead of the EU summit that began at 1700 GMT.

Irish Foreign Minister Simon Coveney, using language that was echoed by a number of other EU countries, said: “This was effectively aviation piracy, state sponsored.”

The EU and other Western countries also called for the release of Protasevich, who was detained when the plane landed.

His social media feed from exile has been one of the last remaining independent outlets for news about Belarus since a mass crackdown on dissent last year. Sophia Sapega, a 23-year-old student travelling with him, was also detained.

Some airlines and countries did not wait for guidance on how to respond to the diversion of the Ryanair flight.

Britain said it was instructing British airlines to cease flights over Belarus and that it would suspend the air permit for Belarus’s national carrier Belavia with immediate effect. KLM, the Dutch arm of carrier Air France KLM, will temporarily halt flights, Dutch news agency ANP reported.

The Montreal-based ICAO has no regulatory power, and the EU has no authority over flights taking off and landing in Belarus or flying over its airspace, apart from direct flights that originate or land in Europe.

Belarus lies on the flight path of routes within Europe and between Europe and Asia, and skirting Belarus would slow flights down and cost airlines money. 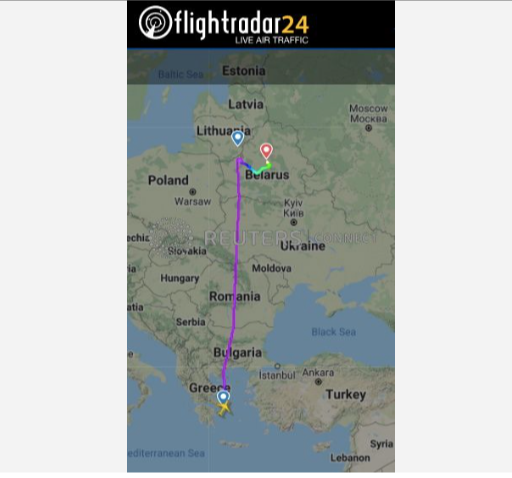 A still image shows a flight path of Ryanair FR4978 on May 23, 2021 on its way from Athens, Greece to Lithuanian capital Vilnius and diverted to Minsk, Belarus, obtained by Reuters on May 24, 2021. Courtesy FLIGHTRADAR24.COM/Handout via REUTERS

The EU and the United States imposed several rounds of financial sanctions against Minsk last year, which had no effect on the behavior of authoritarian President Alexander Lukashenko, who withstood mass demonstrations against his rule after a disputed election.

Lukashenko denies election fraud. Since the disputed vote, authorities rounded up thousands of his opponents, with all major opposition figures now in jail or exile.

NEXTA, a news service where Protasevich worked before setting up his own widely followed blog, ran an interview with his mother, who said that as soon as she heard reports of a bomb scare on a flight, she knew it was a plot to capture him.

“I just want to say that my son is simply a hero, simply a hero,” Natalia Protasevich said, weeping. “I truly hope that the international community will wake up for him.”

Belarus says it acted in response to a false bomb threat written in the name of the Palestinian militant group Hamas. Hamas spokesman Fawzi Barhoum denied his group had any knowledge or connection to the matter.

Belarus said its ground controllers had given guidance to the flight but had not ordered it to land. State media said the intervention was ordered personally by Lukashenko.

Ryanair boss Michael O’Leary, who referred to the incident as a state-sponsored hijacking, said he believed security agents had been on the flight.

Russia, which has provided security, diplomatic and financial backing to Lukashenko, accused the West of hypocrisy.

‘I will give my best’: Pole vaulter EJ Obiena set to begin Olympics bid