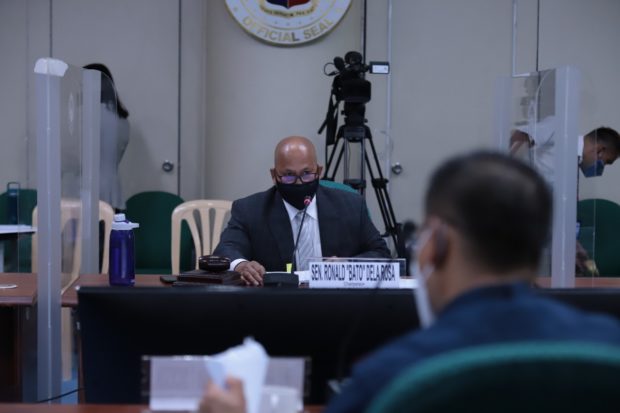 MANILA, Philippines — Anti-drug operatives from the Quezon City Police and the Philippine Drug Enforcement Agency (PDEA) pointed fingers at each other during the Senate probe on their alleged misencounter last February.

During the hearing of the Senate committee on public order, Police Maj. Sandie Caparroso, team leader of QC Police, gave his version of the February 24 bloody encounter with  PDEA agents  during a buy-bust  operation near a mall  on Commonwealth Avenue in Quezon  City.

Two police officers and two from PDEA— an agent and an informant—were killed in the crossfire.

While the anti-drug operatives were shooting at each other, Caparroso recalled his verbal exchange with his counterpart, who later identified himself as PDEA agent John Bryan Castro.

(In fact, I had a verbal exchange with one of them. He introduced himself as the team leader of the backup. So that very moment sir, I was wondering why was there a back up? Whose backup?)

(During that time, he was shouting that they were the back up of those men inside. That’s the only  time it became clear to me that we were engaging in a firefight with PDEA agents)

Upon learning this, Caparroso recalled requesting the PDEA’s team leader to contact their agents and stop the shooting but the latter failed to do so.

(There was one PDEA agent who approached us. I appreciate that time because when his team leader  was getting hot-headed, he came to me. I told him to just stop firing and those outside would follow.)

While the other PDEA agent was helping the police to stop the shooting, Caparroso hit Castro’s action during the incident.

Castro, who was at the hearing room, was later called to respond to the QC team leader’s claim.

In fact, Castro said it was the cops who were cursing at PDEA when they arrived in the area.

(When we arrived sir, they were cursing at us. He was asking what my role there was? We introduced ourselves as PDEA agents, and that I’m the leader of the responding team)

Castro explained that they responded after learning some of their operatives were shot during the encounter.