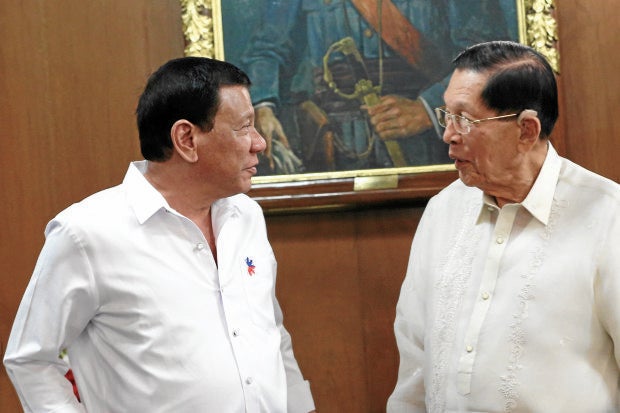 In his regular press briefing, presidential spokesperson Harry Roque said the possibility for Duterte to meet former presidents over the issue was eyed before Enrile shared his views on the maritime dispute.

But, Roque said: “Mukha namang after JPE concurred that the President is pursuing the right policy on the West Philippine Sea, eh wala naman pong urgency na pag-usapan ang bagay na ito either with the National Security Council or with the former presidents.”

(It looks like after JPE concurred that the President is pursuing the right policy on the West Philippine Sea, there is no longer urgency to discuss this either with the National Security Council or with former presidents.)

“So this is not a done deal po, it was something that the President was speculating on before JPE fully concurred with his policy on the WPS,” he added.

Roque said he thinks Duterte is “satisfied” that his policy is “correct and working.”

Duterte heeded Enrile’s advice to just ignore critics of his policy over the disputed waters.

“The approach should be friendly — not a hard, assertive, and aggressive approach,” Enrile also told Duterte in that pre-recorded meeting.

The President, in response, said he would not waste the “best relations” of the Philippines with China.