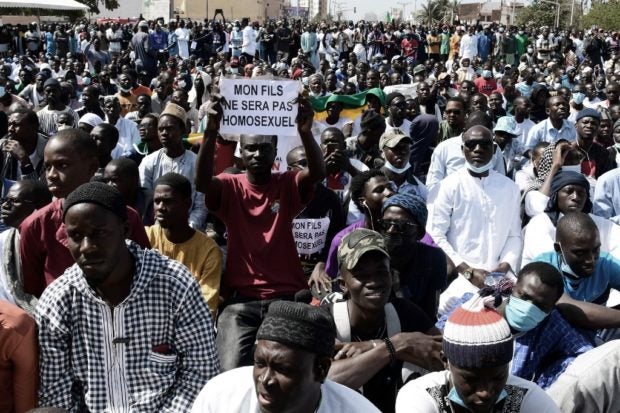 A man holds a sign reading ‘My son will not be an homosexual’ during a protest called by religious associations against homosexuality on May 23, 2021, on the Obelisque square in Dakar. Photo by Seyllou and SEYLLOU / AFP

DAKAR — Several hundred protesters rallied Sunday in Dakar to demand that homosexuality be made a crime in Senegal, according to AFP journalists.

It is not illegal to identify as gay in the deeply conservative Muslim nation, but same-sex activity is already punishable by up to five years in prison.

Religious leaders and civil-society figures addressed hundreds of jubilant protesters, who had gathered in a central square for the rally organized by And Samm Jikko Yi, a civil-society collective that promotes “correct values”.

Ousmane Kouta, a representative of a student religious group, told the crowd that Senegal is a country of faith and values.

“It is homophobic and will remain so forever,” he said, to cheers and chanted slogans.

Aminata Diallo, a member of an association for young Muslims, told AFP that she attended the rally to protest homosexuality and demand its criminalization.

Other protesters were more extreme.

“We will kill them, or we will burn them alive. We’ll never accept homosexuality,” said 56-year-old municipal official Demba Dioup.

Senegal’s President Macky Sall has previously stressed that gay people are not ostracized in the nation of 16 million however, and that the same-sex activity ban reflects cultural norms.

Consensual same-sex relations are legal in 21 of 54 African countries, according to a 2019 report by the International Lesbian, Gay, Bisexual, Trans and Intersex Association.