Indian ports on east coast restrict activities ahead of cyclone 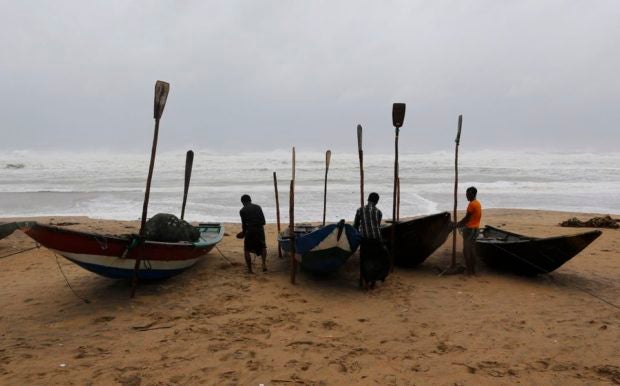 Fishermen tie their boats along the shore before leaving for a safer place at Donkuru village in Srikakulam district, in the southern Indian state of Andhra Pradesh October 12, 2013. REUTERS/Adnan Abid

The Indian Meteorological Department (IMD) has warned that a “very severe cyclonic storm” would impact Indian states including Odisha and West Bengal, where key ports are located.

Some regions are likely to receive heavy rainfall and wind speeds could reach 110 miles per hour, the weather office said.

Paradip port in the eastern state of Odisha has asked for all loading and unloading equipment, cranes and machines to be secured, according to a notification issued on Sunday.

“All vessels at Paradip anchorage to pick up anchor and move to sea, equipment and machineries at under construction areas to be secured,” the port said in a notification on Sunday.

“Before the onset of the cyclone, all port vessels will be taken inside dock for shelter. No ships will be kept in river anchorages or jetties,” Kumar said.

Authorities at Haldia port in the state of West Bengal have asked for inward movement of vessels to be stopped from Monday evening, two trade sources said.

India’s armed forces have already moved nearly 1,000 rescue personnel and kept dozens of aircraft on stand-by ahead of Cyclone Yaas, which is expected to hit the eastern coast on Wednesday.

The southern state of Andhra Pradesh said it has procured adequate stock of liquid medical oxygen from Odisha, a key supplying state on India’s east coast. The cyclone is likely to make landfall near northern Odisha on Wednesday.