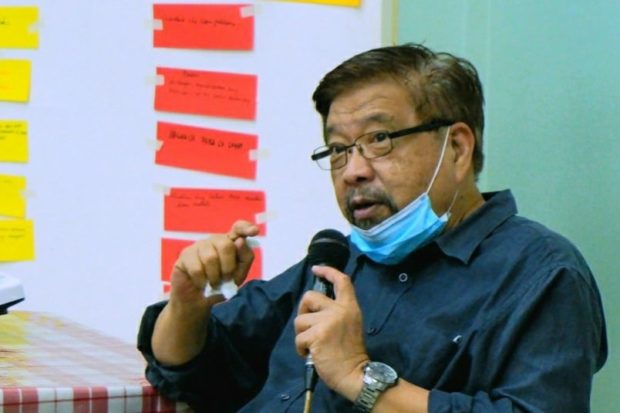 COTABATO CITY, Maguindanao, Philippines — A priest and longtime peace advocate in Mindanao succumbed to cardiac arrest on Sunday, while still recovering from COVID-19.

Fr. Eliseo Mercado Jr., a known peace advocate who tirelessly worked for peace in Mindanao, died at 3:25 p.m. on Sunday at Cotabato Regional and Medical Center (CRMC), where he had been confined for weeks after testing positive for the coronavirus early this month.

“It is with great sadness that we announce the passing of Fr. Eliseo Mercado Jr., OMI,” Fr. Amador Castillo, Mercado’s colleague, said in a statement. He was 72.

Mercado, a senior member of the Oblates of Mary Immaculate (OMI), studied Theology and Missiology at the Gregorian University in Rome and Islamic Studies at the University of Cairo, Egypt, according to the Institute of Spirituality in Asia (ISA).

He served as parish priest of the Muslim-populated town of Datu Piang, Maguindanao, and became active in peace-building processes in Mindanao. In 1992, he became president of the Notre Dame University in Cotabato City, where he established the Institute of Peace Education.

Mercado received a number of presidential citations for his peace building efforts, according to ISA. Among these were the Presidential Award from former President Corazon Aquino for Outstanding Community Service; the Presidential Citation for Outstanding Service and Contribution to Peace from former President Fidel Ramos for his participation in the peace process between the government and the Moro National Liberation Front and his role in the Southern Philippines Council for Peace and Development consultative assembly. He also bagged the Benigno S. Aquino Jr. Fellowship Award for his service and commitment to the peace process and peacebuilding efforts in Mindanao.

Mercado was the third priest in the Archdiocese of Cotabato to succumb to complications brought about by COVID-19.

He had been confined at CRMC since May 8 after he tested positive for SARS-CoV-2, the virus that causes COVID-19. He had recovered and was ready to go home when he suffered cardiac arrest at past 3 p.m. on Sunday.

He had undergone heart bypass operation many years ago. Since then, he had been using a pacemaker to help his heart beat at a normal rate and rhythm.

For weeks, he successfully battled the disease. On May 22, his swab test finally yielded a negative result.

“He was moved to the intensive care unit of the CRMC to complete his recovery when suddenly at 3:20 p.m. today, May 23, his heart stopped due to a heart attack,” the OMI said.