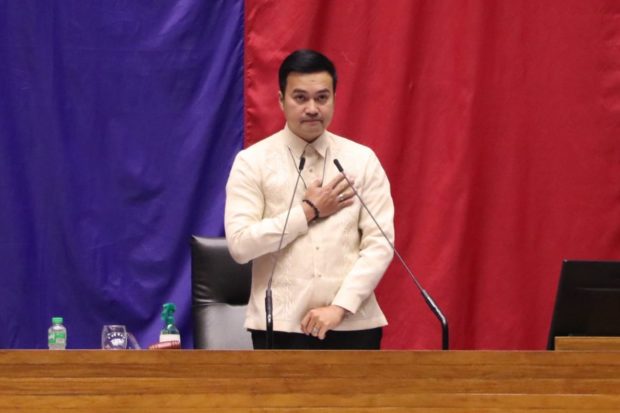 SPEAKER LORD ALLAN VELASCO. Photos from the Office of the Speaker, House of Representatives

MANILA, Philippines — House Speaker Lord Allan Velasco wants to raise the rate of dividends that government owned and controlled corporations (GOCCs) remit to the government to help raise funds for its pandemic response.

This is amid plans to sell government assets and the privatization of GOCCs as a measure to boost the country’s coffers to pay for the rising cost in COVID-19 response and interventions.

House Bill 9349 seeks to amend Republic Act 7656 or the 1993 Dividend Law, which requires GOCCs to declare and remit to the government at least 50 percent of the annual net income as dividends.

Velasco’s proposal aims to mandate GOCCs to remit 75 percent of annual net income as cash dividends, or an increase of 25 percent.

The bill, which has been referred to the House government enterprises and privatization panel, also proposed that “additional dividends may be collected out of accumulated earnings.”

“The 25 percent increase will surely boost the remittance and help raise additional funds,” the House Speaker said in the explanatory of his bill filed last May 17.

He added: “This proposed measure may not fully address the urgent need for adequate government funding for the COVID-19 pandemic response, but will definitely help ease the burden on raising revenue to help alleviate suffering of our marginalized kababayans and provide the country with much needed financial impetus.”

The bill also sought to amend the penalty for non-compliance with the Dividend Law.

Instead of a fine up to P 50,000 and a three-year prison term as stated in RA 7656, HB 9349 proposed that GOCCs not complying with the law “shall not be entitled to avail, allot, or distribute any form of performance bonus or incentives.”

Velasco filed the bill after finance secretary Carlos Dominguez III wrote him to propose amendments to RA 7656 as a means to “raise more funds for our economic recovery.”

He noted that P 119.1 billion out of P 156.97 billion were used to fund the social amelioration program and the government response to ease the economic impact of the pandemic.

Velasco stressed the need to come up with “adequate revenue sources” to back up fiscal stimulus measures forming part of the COVID-19 response, recovery and rehabilitation efforts.

Recently, some senators backed the proposed sale of state assets and the privatization of state-owned firms to help fund the government’s ballooning expenses for its COVID-19 response.

Earlier this month, the DOF said the Philippines has secured $ 18.4 billion in loans from foreign sources to fund its pandemic response, such as vaccination, upgrading medical facilities and equipment, cash aid to poor families and specific sectors, and building quarantine and testing centers.

In Velasco’s proposal, the hike in dividend remittance will also apply to GOCCs considered as investment promotion agencies, processing zones or those located in processing and economic zones, acquired asset corporations and government instrumentalities with corporate powers.

“Non-profit corporations shall remit 75 percent of all its interest income earned from investment, net of final tax,” HB 9349 said.

In addition, “the new rate of dividends to be declared and remitted to the national government by GOCCs provided under this act shall apply on net earnings starting 2020.”

However, GOCCs which administer real or personal properties or funds held in trust for the use of its members are not covered by the mandated dividend remittance.

Velasco sought to expand this exemption to include the Social Security System and Philippine Health Insurance Corporation, provided that its members make regular contributions to the said funds.