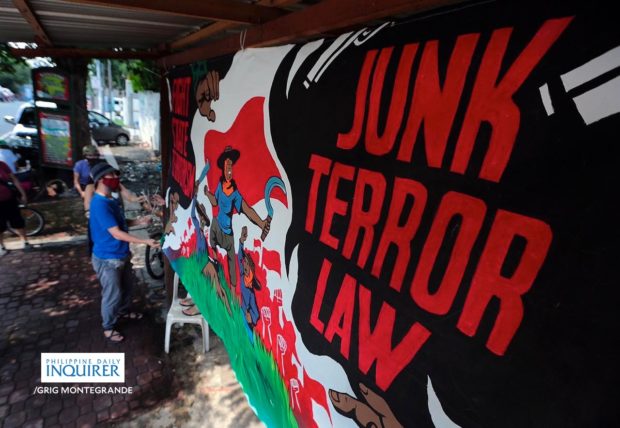 FILE – Artist and peasant advocates hung a public mural in Quezon City to protest the passage of the anti-terror law, which allegedly heightened red-tagging by some government officials. -INQUIRER/GRIG C. MONTEGRANDE

MANILA, Philippines — Several youth groups, including the College Editors Guild of the Philippines (CEGP), trooped to the Commission on Human Rights (CHR) and the National Bureau of Investigation (NBI) to file complaints against the government’s alleged harassment and red-tagging of youth leaders.

CEGP said in a statement on Friday that the complaint included documented attacks against student journalists and young activists — which they believe heightened after the passage of the Anti-Terrorism Act that amended the Human Security Act of 2007.

“Even during a pandemic, the state never fails to showcase its incompetence to the Filipino people. CEGP expresses its strongest condemnation towards these series of attacks, especially for the ranks of the campus press,” CEGP claimed.

“Ever since terror law has been rail-roaded, it has already given student journalists the chilling effect; now that it has been formally instituted, this effect has severed with multiple intrusions it paved the way. For campus journalists, for instance, CEGP has documented a lot of cases of red-tagging, as well as other series of harassment and threats it received from a suspected troll account,” it added.

The group also called on the Supreme Court (SC) to issue a temporary restraining order on the law, which activists and opposition personalities fear may be used to stifle dissent with its longer detention period without official charges and possibilities of warrantless arrests.

SC is currently discussing several petitions against the Anti-Terrorism Act through oral arguments between those in favor and against the controversial law.

“CEGP and other youth groups call on the Filipino people to join our fight for human rights investigations in the country. We vow to junk the much-contested law in history and urge the High Court to issue Temporary Restraining Order to stop the implementation of terror law,” the guild noted.

“This is a matter of concern that needs to be highlighted, especially in a time where killings continue to heighten amid other national burdens brought about by the pandemic,” it said.

CEGP is one of the several activist groups tagged by government officials as having links to the communist insurgency waged by the Communist Party of the Philippines and the New People’s Army.

Last November 2020, Presidential Communications Undersecretary Lorraine Badoy, who also doubles as the spokesperson of the National Task Force to End Local Communist Armed Conflict (NTF-ELCAC), questioned whether a major news outfit has a CEGP and League of Filipino Students (LFS) cell in its editorial department, as the outlet’s Twitter account retweeted CEGP and LFS tweets.

In her Facebook post, Badoy said that LFS is a “known front” of the CPP-NPA and the National Democratic Front.

READ: CNN PH ‘strongly objects’ to its being red-tagged by PCOO Usec Badoy

For the second time in two years, CEGP has gone to the CHR to get some help. In 2020, the group denounced the red-tagging of the University of the East’s Dawn newspaper.

In their complaint last July 2020, CEGP said several instances where school papers were either directly or indirectly linked to communist movements — just because they were critical of the government’s COVID-19 response.