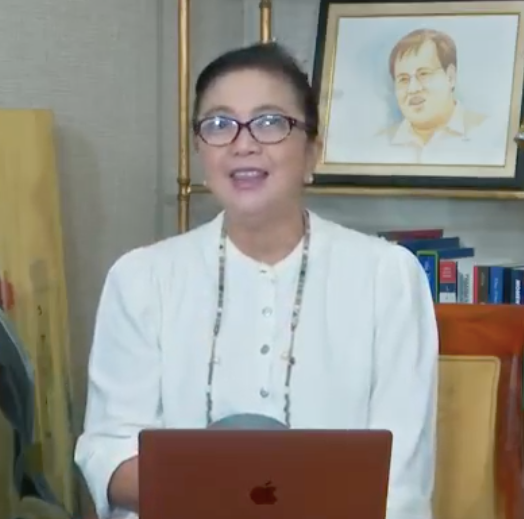 MANILA, Philippines — Vice President Leni Robredo’s spokesperson has clarified that the second-highest leader has always been encouraging Filipinos to get vaccinated against COVID-19, amid claims from Malacañang that she has qualms over vaccines coming from China.

Lawyer Barry Gutierrez, spokesperson at the Office of the Vice President, on Friday said that there would be no problem for Robredo to appear in an infomercial with President Rodrigo Duterte himself, to increase vaccine confidence among Filipinos.

But he also stressed that it is up to Malacañang to set aside politics in the issue, as presidential spokesperson Harry Roque claimed that Robredo must first address her stand on China-made vaccines.

(The position of VP Leni is clear: She is open to help out encourage more Filipinos to get vaccinated.)

(If in small things like this Malacanang can’t set aside politics, that is with them. VP Leni has been working for a long time and she is ready and willing to help. If they are ready then she’ll just here.)

Duterte and Robredo — both considered heads of the administration and opposition blocs, respectively — were urged by Senator Joel Villanueva to appear in a public service announcement to boost confidence in COVID-19 vaccines.

A latest survey from the Social Weather Stations showed that only 51 percent of Filipinos are confident with the government’s vaccination program.  Within that, only 58 percent said they were willing to be vaccinated.

From the 1,200 respondents interviewed, SWS said that only 32 percent were willing to get vaccinated, 35 percent are uncertain, and 33 percent are unwilling.

But according to Roque, Robredo must first clear out her stand on Chinese vaccines.

(The VP has to first clarify her stand whether she would accept all vaccines because she earlier had a declaration that she does not approve of Chinese vaccines and this issue was politicized.)

Robredo’s stance on the CoronaVac — vials made by Chinese pharmaceutical company Sinovac Biotech — has been perceived by Duterte as being overly critical as she called for a review on the donated vaccines, which arrived in February.

This was the first batch of vaccines to arrive in the country, coming from the Chinese donation.

The Vice President also noted that Chinese-made vaccines may have become a source of issue in the Philippines because government officials have made a lot of statements before the vaccines arrived — including Duterte’s admission that he prefers China and Russian vials.

Robredo has also said in the past that was willing to take any COVID-19 vaccine approved by the Food and Drug Administration (FDA).  However, she was not yet allowed to receive any vaccine as the prioritization chart requires medical frontliners to be on the top of the pecking order.

Last Wednesday, she got her first dose of the vaccine from AstraZeneca.

Vaccine confidence among Filipinos have been low for most of the time.  In November 2020, SWS said that 66 percent of Filipinos have expressed willingness to be vaccinated against COVID-19, should vaccines become available — which indicates that trust in vaccines actually went lower according to latest data.

In terms of a Pulse Asia survey in March, results said that 61 percent of Filipinos are not willing to be vaccinated, with safety still being the top concern.