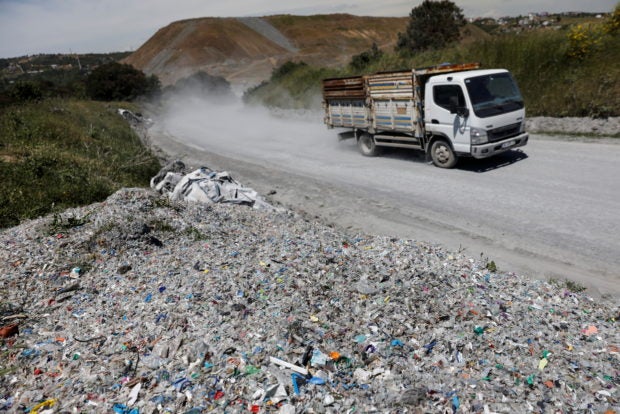 Plastic waste illegally dumped by a roadside is seen near Alibeykoy Dam as Turkey has banned the import of ethylene polymer plastic waste, in Istanbul, Turkey, May 20, 2021. REUTERS/Umit Bektas

ANKARA — Greenpeace welcomed a ban by Ankara on imports of most plastic waste after the environmental group said it uncovered exports, some possibly illegal, from Britain and Germany that created “mountains” of trash in southern Turkey.

The environmental group said its teams visited 10 sites in Adana province and found plastic waste – most either burned or on fire – mainly from the United Kingdom, Germany, Poland, and other EU countries.

The plastics were left on roadsides, in fields, or spilling into water sources, it said in a report published on Monday, with waste from UK supermarkets and German retailers found at all sites.

Turkey’s trade ministry said on Tuesday it removed polyethylene plastic – used in shopping bags and many forms of packaging – from the list of polymers allowed into the country as of July 3, formalizing a ban it had been planning to introduce.

While welcoming the ban, Murat Bakan, a lawmaker from the main opposition Republican People’s Party (CHP), told Reuters it was imposed because the government could not properly supervise recycling.

Exporting plastic waste is illegal unless it is destined for recycling or incineration in an energy conversion plant.

Goods made out of polyethylene – including plastic shopping bags – must be recycled quickly, usually within a month, otherwise, they become non-recyclable, making them illegal if they are exported mixed with standard non-recyclable materials, Greenpeace said.

The group said the Turkish ban marked a milestone.

Nihan Temiz Atas, biodiversity projects lead from Greenpeace Mediterranean, told Reuters it would cover 74% of the plastic Turkey imported last year – some 660,000 tonnes of waste – including 95% of UK imports,

“That means they (Britain) have to take responsibility… and recycle their own materials,” she said.

A spokesman for Defra, Britain’s environmental department, acknowledged the country should handle more of its waste at home.

“We are committed to banning the export of plastic waste to non-OECD countries and clamping down on illegal waste exports – including to countries such as Turkey – through tougher controls,” he said in a statement.

Turkey is the UK’s top destination for plastic waste exports, taking around 210,000 tonnes, or 30% of the total, in 2020, according to official data.

Manfred Santen, a chemist at Greenpeace Germany, said it was “appalling” to see German plastic waste burning on Turkish roadsides, and called on Berlin to take it back.

There was no immediate response from the German government to a Reuters request for comment.