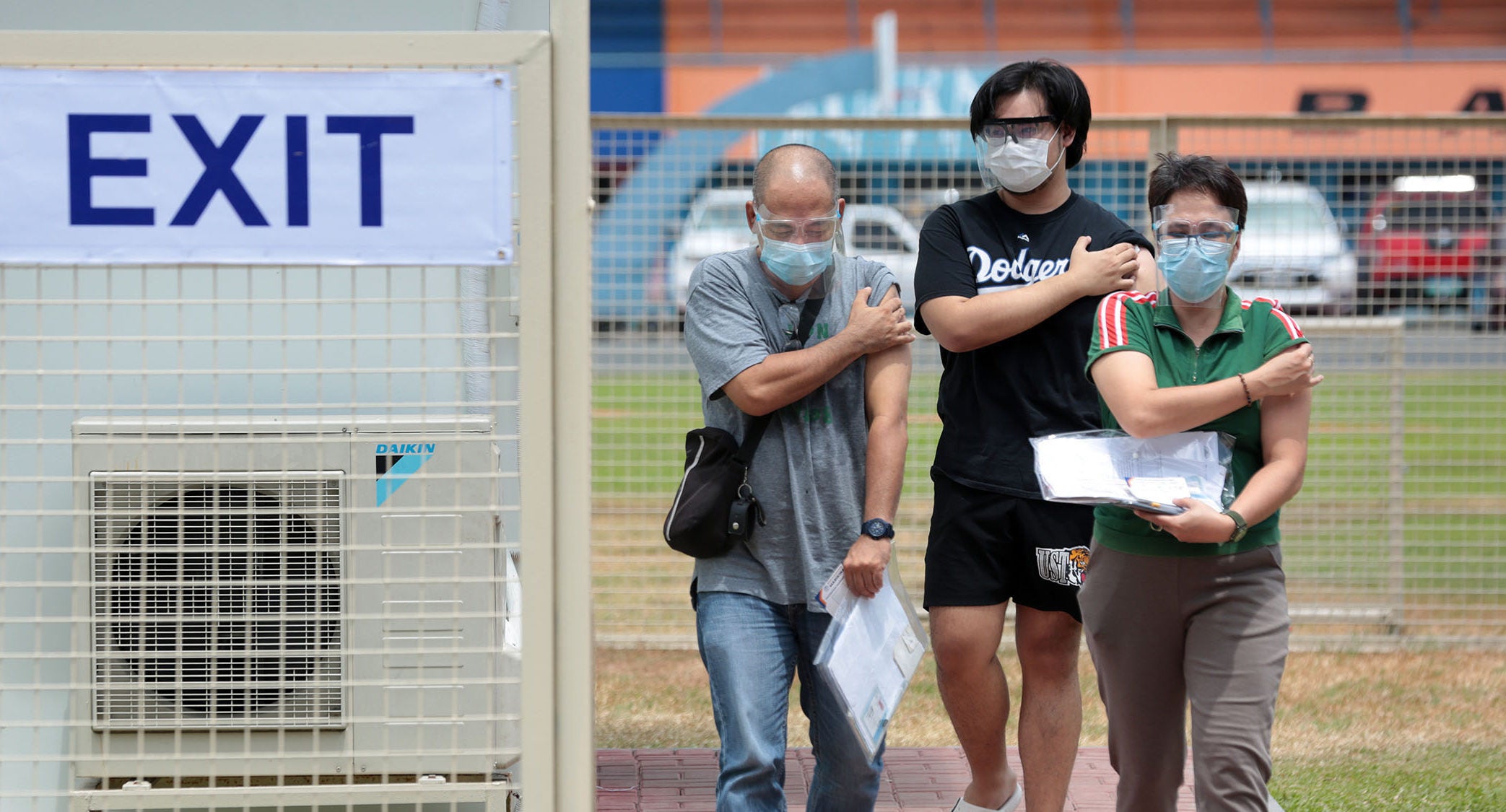 CHOICE SHOT Three people massage their armswhere they had been jabbed with the much-coveted Pfizer vaccine at the Marikina Sports Center on Thursday. —GRIG C. MONTEGRANDE

MANILA, Philippines — To meet head-on the twin problems of vaccine hesitancy and vaccine preference, President Rodrigo Duterte has ordered local officials not to disclose the brand name of the shots to encourage people to get inoculated with whatever is available so that the country could achieve herd immunity sooner than later, presidential spokesperson Harry Roque said on Thursday.

It was observed that when the US-made Pfizer COVID-19 vaccine was deployed early this week, there were longer queues for it than for the shots made by China’s Sinovac Biotech, creating potential superspreader events as people swarmed vaccination centers.

Roque said Duterte gave the directive after seeing pictures of the queues where physical distancing regulations were not followed.

“The President noticed that our fellow countrymen have become choosy when it comes to the vaccine brand,” Roque said during a press briefing.

“This is what the President said—that we can’t choose the brand of vaccine,” he said.

“So, we appeal for understanding from our fellow countrymen. Our position really is that there is no policy giving the people the opportunity to choose,” Roque said.

In his public address aired on Tuesday, the President said Secretary Carlito Galvez Jr., who is in charge of the national vaccination program, will keep a “blind eye” to vaccine brands.

“Whether you are a millionaire or a pauper, you get what is given to you. You can’t choose,” Duterte told Filipinos.

“Have yourselves vaccinated by any of the vaccines available. They are all potent. They are all effective. There’s no reason for you, really, to be choosy about it,” he added.

The President himself waited two months after the vaccination program was rolled out on March 1 to be cleared by his doctor to receive his first shot of the BBIBP-CorV vaccine made by the state-run China National Pharmaceutical Group, or Sinopharm.

The Sinopharm vaccine has only been given a compassionate use permit by the Food and Drug Administration (FDA).

Duterte ordered the return of the remainder of the 1,000 Sinopharm doses donated by Beijing after he was criticized for using a vaccine brand that did not get an emergency use authorization (EUA) from the FDA.

“The best vaccine is the one that is available, therefore in order to overcome brand preference, LGUs (local government units) should not announce the brand of vaccine to be used in vaccination centers,” Año said in a statement.

He said people should only be told of the vaccine brand just before actual injection to allow them to give their “informed consent” to the jab. Anyone may refuse but that person has to return to the back of the line, Año said.

But Benhur Abalos, chair of the Metropolitan Manila Development Authority, gave a slightly different version of how the consent would be obtained.

A person who goes to a vaccination center would be screened by the doctor in charge who will decide which of the available brands would be suitable for him or her and inform that person accordingly, Abalos said.

Repeating statements from health authorities, Año said all the available vaccines prevent hospitalization or critical illness from the severe respiratory disease. “That is what is important,” he said.

Prior to this, the city government regularly identified the brand of vaccine to be used and the number of shots allocated per vaccination center.

Makati City spokesperson Michael Camiña acknowledged the right of residents to know and to refuse or accept a particular vaccine brand.

“[But]” if they refuse, they will be placed on a deferral list and we cannot give an exact date when they will be vaccinated,” he said.

In addition to the BNT162b2 shot made by Pfizer and Sinovac’s CoronaVac, two other vaccine brands are currently available in the Philippines—Sputnik V made by Russia’s Gamaleya Scientific Research Institute and ChAdOx1 nCov-2019 produced by AstraZeneca and Oxford University of the United Kingdom. They are administered in two doses that are at least four weeks apart.

The government plans to get seven different vaccine brands because the global shortage made it difficult to rely on just two to meet the country’s requirements, Roque said. This decision, he added, would ensure that there would be enough vaccines to inoculate Filipinos in order to achieve herd immunity.

The National Task Force Against COVID-19 and the DOH reported that as of May 18, 2,512,942 had been inoculated, including 786,528 who received their second dose, or those fully vaccinated.

The government is aiming to vaccinate 58 million to 70 million Filipinos to achieve herd immunity.

Health Secretary Francisco Duque III on Thursday assured Filipinos that all these vaccines were safe and effective and had been cleared for emergency use by the FDA.

“As more vaccine supplies become readily available, I encourage everyone to take the earliest opportunity to get vaccinated. COVID-19 vaccines give additional protection against COVID-19 to prevent hospitalization and death,” Duque said.

Three laboratories failed to submit their data on time, the DOH said.

—WITH A REPORT FROM DEXTER CABALZA AND INQUIRER RESEARCH