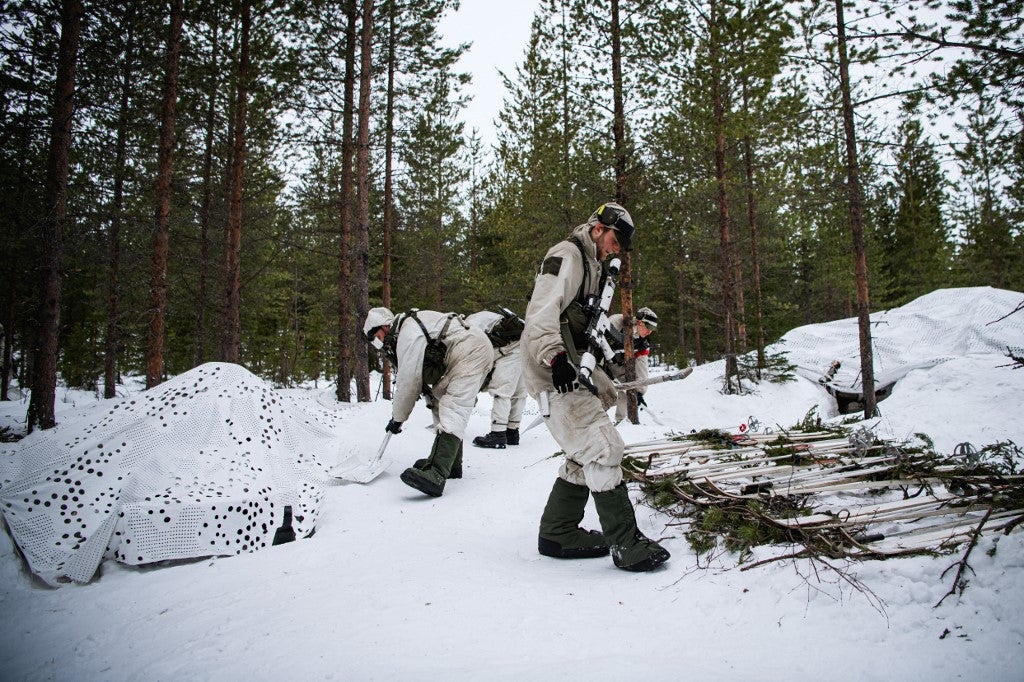 Two soldiers from one of Sweden’s Ranger Battalions prepares to go out on patrol in a forest north of the town of Boden in northern Sweden on March 19, 2021, during the annual “Winter Sun” exercises, which tests members of the Swedish military’s ability to operate in sub-Arctic climates. Jonathan NACKSTRAND / AFP

BODEN, Sweden — In a snow-draped forest in northern Sweden, hundreds of soldiers in white-camouflage uniforms built dugouts, patrolled on skis and laid mock ambushes to test their readiness to fight in Arctic environments.

Winter combat skills are attracting more interest both in Sweden and abroad as tensions rise in the strategic High North, and as melting Arctic ice opens new shipping lanes and uncovers a wealth of natural resources.

Sweden’s annual “Winter Sun” exercise takes place just 80 kilometers (50 miles) below the Arctic Circle, where temperatures can sink to -30 Celsius (-22 Fahrenheit), pitting tanks, artillery and some 900 soldiers against each other.

The Scandinavian country also hosts French, British and US forces to train them in Arctic warfare at its specialized school.

In such a brutal environment, even basic tasks — like changing socks regularly — can make the difference between life and death.

“Minor errors can become potentially life-threatening in minutes,” Lieutenant-Colonel Fredrik Andersson told AFP during the warfare training in March, a camouflaged cap pulled low over his eyes as he watched his unit dig shelters to hide from the enemy and seek refuge from the cold.

Using heavy metal spades, the recruits smoothed over any signs of their tracks in the thick snow before disappearing into the dugouts to change clothes to stay dry.

Others took a moment to eat from the generous ration bags to give them the extra energy needed to work in the cold — picking between the boil-in-bag pasta, sweets, cereal, dried beef bearnaise, isotonic drinks and coffee.

“Everything takes longer in the winter,” added Oscar Sandstrom, a 25-year-old junior officer, the crackle of gunfire audible in the distance.

Andersson and his troops hail from Sweden’s Ranger Battalions — specialists in cold-weather warfare trained to carry out reconnaissance and ambushes behind enemy lines, traveling by ski and snow scooter.

Around him, conscripts in white camouflage jackets with thick boots hurried to put the finishing touches to snow shelters, using spades to cover their tracks before disappearing into the dugouts.

More battalions of the Rangers are set to be created in the country’s far north, as well as a brigade of armored vehicles.

Andersson says there is heightened interest in his unit’s skills.

“Since the Arctic ice is melting, we see new trade routes coming up potentially, and a lot of nations have become interested in this area,” he said.

The ability to fight in subarctic environments is just one area where Sweden is expanding its military, following its announcement in late 2020 that it would increase defense spending by 40 percent over five years.

Sweden reintroduced conscription in 2017 after several years of increasingly assertive Russian behavior, including its annexation of Crimea and violations of Swedish airspace.

“There is a change in the security situation in our part of Europe,” Swedish Defense Minister Peter Hultqvist told AFP, citing “the Russian aggression against Georgia in 2008, the annexation of the Crimea in 2014, the ongoing conflict in Ukraine.”

Hultqvist too has noticed more countries vying for influence over the High North, including China.

“We see climate change opens up far more natural resources in that area and this creates an interest from different powers to have a higher level of influence.”

Although Sweden is not a NATO member, it also trains in the Arctic with its Nordic neighbors Norway, Denmark and Finland, conducting air and land exercises.

Niklas Granholm, deputy director of research at Sweden’s Defense Research Institute, warned that climate change was not only increasing the region’s strategic importance, but may impact how troops operate, as weather patterns become less predictable.

“The winters aren’t what they used to be so the operational and tactical circumstances may differ,” he said.

Lakes or bogs that would freeze over with ice thick enough to support military vehicles may no longer be viable as weather patterns shift, with warmer, wetter winters, Granholm said.

In the forests around Boden, the head of Sweden’s sub-Arctic warfare school watches teams of soldiers head out to patrol on skis.

With white-camouflaged assault rifles slung over their thick, snow-camouflaged uniforms,  group pushed themselves along a small track to carry out a reconnaissance mission.

Lieutenant-Colonel Morgan Gustafsson, his grey beard reaching down past the collar of the white camouflaged uniform of the Ranger Battalion he joined in 1986, has experienced first-hand the changes in Sweden’s defense policy.

But Gustafsson said the key to fighting in such a vast environment rested on mastering the basics.

“We start with the most basic things — how to change your socks, how to keep dry, what to eat, what to drink and then we build on with weapons, skis, snowshoes and snowmobiles,” he said.