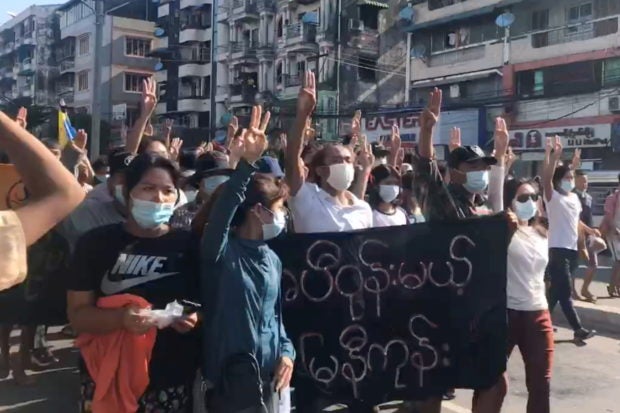 People protest in Hlaing Township, Yangon, Myanmar May 2, 2021, in this still image from a video obtained by Reuters.

TOKYO — Two officials at Myanmar’s embassy in Tokyo have become the latest diplomats dismissed by the junta after protesting the military coup in their country, Japan’s Kyodo news agency reported Thursday.

Administrator Aung Soe Moe and a junior colleague were fired after they went on strike, the agency said.

Citing a leaked document, Kyodo said some 100 Myanmar diplomats around the world have been dismissed after opposing the coup.

Kyodo said the two diplomats left the embassy compound on March 11, days after posting on Facebook in support of peaceful anti-junta protests.

They did not resign but have had their diplomatic status and passports revoked, and are living in Tokyo with the help of other Myanmar nationals, Kyodo said.

“The foreign ministry is studying what kind of response is appropriate, giving consideration to Myanmar’s current situation,” Kato added.

Japan has criticized the coup in Myanmar and called for the restoration of democracy, but it has faced pressure to stake out a stronger position on the crisis.

The Myanmar embassy was not reachable for comment on Thursday.

In April, pro-junta diplomats seized the country’s embassy in London — leaving the ambassador locked out after he called for the release of Suu Kyi.

Other Myanmar diplomats including at the United Nations and in Berlin have also faced similar threats or ousting over their protests.

Japan has strong economic ties with Myanmar and long-standing relations with its military.

Last week, a Japanese journalist arrested while covering the aftermath of the Myanmar coup was released in a diplomatic gesture and returned to Japan.

Japan, a top aid donor to Myanmar, announced in March it was suspending new assistance in response to the coup, but stopped short of the sanctions imposed by some nations on military and police commanders.