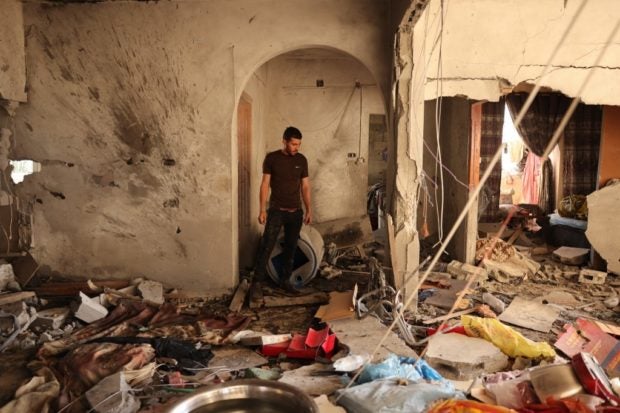 A relative inspects the damage inside a house in Deir el-Balah in the central Gaza Strip, on May 19, 2021, where Eyad Saleha, a 33-year-old disabled Palestinian man on a wheelchair, his pregnant wife and their 3-year-old daughter were killed in an Israeli air strike. Photo by SAID KHATIB / AFP

DEIR-EL-BALAH, Palestinian Territories — Disabled Palestinian Eyad Saleha, 33, was waiting for lunch Wednesday when a missile fell on his family home in Gaza, killing him, his pregnant wife and their three-year-old daughter, his brother and authorities said.

The family’s living room was blasted to bits, and the mangled parts of a child’s red bicycle lay amid the wreckage. Inside their toppled fridge, grey dust covered a bowl of fresh red tomatoes.

Israeli air strikes have killed 227 people including 64 children in the besieged coastal enclave since May 10, according to the health ministry in Gaza.

Rockets fired by Palestinian armed groups have killed 12 people including one child in Israel in that same period, Israeli police have said.

Israel’s army has said it seeks to avoid “collateral damage” from strikes that are aimed at military targets.

It has also repeatedly said that misfired rockets from Palestinian groups which have landed inside Gaza Strip could be responsible for civilian deaths in the enclave, although there was no immediate indication a Palestinian rocket caused the family’s death.

The Israeli army did not provide specific comment on Wednesday’s strike in Deir el-Balah, which tore through the seaside building’s facade and destroyed all three rooms in the extended family flat.

It killed Saleha, his 33-year-old wife Amani, and their daughter Nagham.

Distraught at the morgue, Omar Saleha, 31, said his brother Eyad had been unable to walk for 14 years, and was not a fighter.

“What did my brother do? He was just sitting in his wheelchair,” he said.

“What did his daughter ever do? What did his wife do?” asked the younger brother, who was with neighbours when the strike hit.

“They were just getting ready to have lunch.” 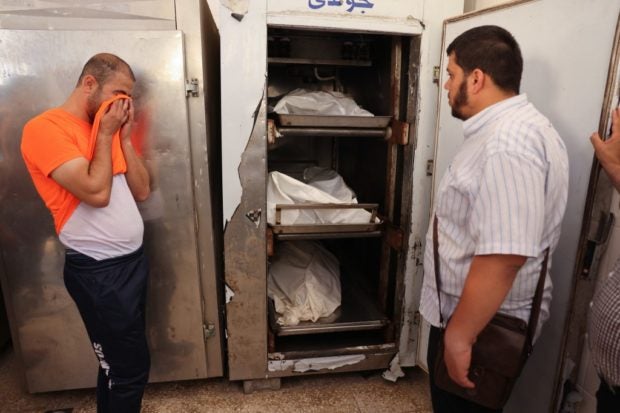 A brother weeps in front of the corpses at the morgue, where Eyad Saleha, a 33-year-old disabled Palestinian man on a wheelchair, killed in his house along with his pregnant wife and their 3-year-old daughter during an Israeli air strike were transported, in Deir el-Balah in the central Gaza Strip, on May 19, 2021. Photo by SAID KHATIB / AFP

He said Saleha was unemployed, and shared the flat with his mother and three brothers.

Like many others in the impoverished coastal enclave, they relied on aid from the UN agency for Palestinian refugees.

The Gaza health ministry on Wednesday reported the killing of a “disabled man, his daughter and pregnant wife”.

“Killing innocents at home — even foetuses in their mothers’ bellies — is a crime,” he said.

“How many more dead must there be for the world to grow a conscience?”

It was not clear if the three-story building was hit on purpose or by accident.

Israel claims it is targeting commanders of the Hamas Islamist group ruling the enclave, as well as its tunnel networks.

Umm Eyad, 58, was not at home either when the strike killed her son.

She had left two days earlier to stay with her brother, thinking his home would be safer during the strikes.

“He would pray for the situation to calm down,” she said of her late son.

“He died while waiting for a newborn.”