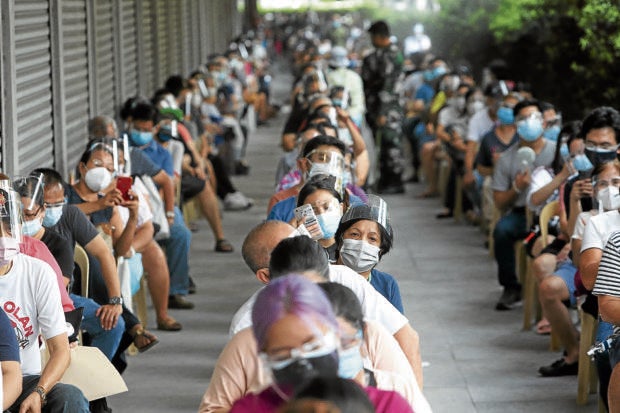 CROWD DRAWER Vaccination sites offering the US-made Pfizer jabs are drawing large crowds, such as this one outside the Prince Hotel in Ermita, Manila. Authorities have warned against potential superspreader events as the government ramps up the rollout of vaccines. —MARIANNE BERMUDEZ

MANILA, Philippines — There is a “marked decline’’ in COVID-19 cases in Metro Manila and Central Luzon but an uptick in cases is being monitored in the Visayas and Mindanao, the Department of Health (DOH) said on Tuesday.

“We need to closely monitor Visayas and Mindanao since this is where we’re seeing an increase in cases. It’s not a rapid increase but we’re seeing a rise already,” Dr. Alethea De Guzman, OIC director of the DOH Epidemiology Bureau, said in an online press briefing.

De Guzman said cases in the Zamboanga Peninsula rose to 1,500 at the start of May, which was quadruple the number of cases the region had in April.

When asked what could be the reason for the increase in cases, De Guzman said less strict adherence to minimum public health and safety standards could have caused the increase.

But despite the rise in cases, De Guzman said the DOH would not yet recommend heightened quarantine restrictions in those areas as the department believed regional health facilities could still handle the cases.

However, De Guzman said heads of local government units could still authorize granular lockdowns in areas that are seeing an increase in COVID-19 cases.
In contrast, Metro Manila and Central Luzon, as well as Calabarzon, have seen a decline in cases, De Guzman said.
“Cases in Luzon have plateaued and gone down slightly,” she said.

According to De Guzman, the average daily reported cases in Metro Manila from May 11 to 17 dropped to 1,417, from the 5,325 average cases during the peak of the surge from March 30 to April 5.

Tuesday’s new case count was the lowest since March 17 when the DOH logged 4,387 new cases.

In its daily case bulletin, the DOH said there were still 52,291 active cases or patients who were currently sick. This was also the lowest since March 14, when there were 47,807 active cases.

However, 110 individuals also succumbed to the disease, which pushed the death toll to 19,372.

The DOH said eight laboratories failed to submit their data on time. It also removed 24 duplicates from the total case count. Meanwhile, 64 cases previously tagged as recoveries have been reclassified as deaths following final validation.

In the same press briefing, De Guzman said the increase in cases in Puerto Princesa, Palawan, was not caused by tourists.

“These are local cases that have no travel history outside their areas,” she said.

But De Guzman said there was no link between the opening of domestic tourism and the rise in Covid-19 cases.

OCTA Research group earlier included Puerto Princesa in its list of areas of concern outside the National Capital Region because of the increase in cases in the city.

As of Monday, there were 1,582 recorded cases in Puerto Princesa, 502 of which were active cases or currently sick patients.