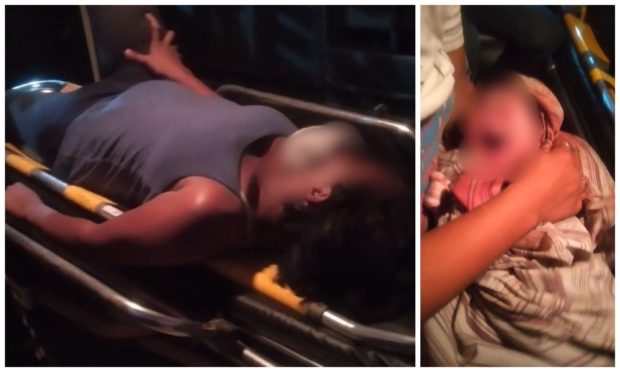 MANILA, Philippines — A 28-year-old woman gave birth on Tuesday night to a healthy baby girl, with some help from her husband, right out in the open — in front of the World Trade Center on Macapagal Boulevard in Pasay.

A team of paramedics dispatched by the Pasay Disaster Risk Reduction and Management Office, which had been called by the city’s traffic base, arrived at 6:23 p.m., just as soon as the baby came out.

Mark Anthony Castillo, a nurse who was part of the team, related to INQUIRER.net over the phone what happened.

“I could not figure out then how the mommy managed to get the baby out,” Castillo said in Filipino. “But they [husband and a bystander] said she had just come out when we arrived.”

“We just helped her. The baby came out right after her water bag burst,” he went on.

Their quick arrival proved fortunate. The umbilical cord of the baby was coiled around its neck and the placenta was exposed.

The paramedics disentangled the cord and rushed mother and child to the Pasay City General Hospital.

Asked if it had possibly been a breech birth, Catillo said: “That’s possible. The stress in the belly could have caused the baby to turn until the cord got wrapped around her neck.”

Much to their relief, Castillo said the baby girl turned out fine and healthy as the woman had a full-term pregnancy.

The woman and her husband, both from Iligan City in Lanao del Norte, were apparently stranded and had been staying in front of the World Trade Center for some time, according to Castillo. They were not able to ask her, however, how long they had been staying there.

“They were decently dressed and they had bags with their belongings,” he said.

According to the Pasay Public Information Office, the hospital conducted a swab test for COVID-19 on the mother. She and her baby are still at the hospital as of this writing.

Pasay authorities requested that the mother remain unidentified identified to preserve her privacy.