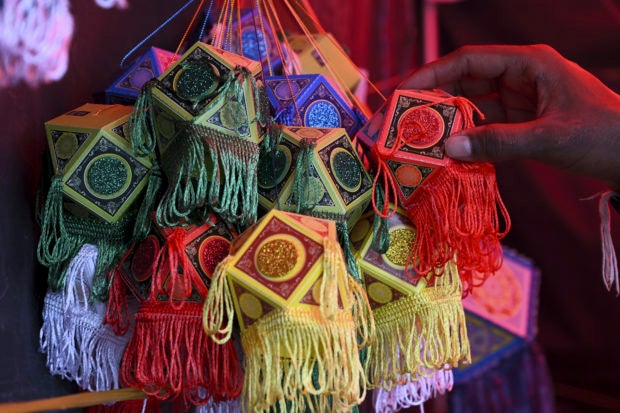 A street vendor sorts lanterns to sell ahead of the Vesak festival, also known as Buddha Jayanti to commemorate the birth, enlightenment, and death of Gautama Buddha, in Colombo on May 18, 2021. (Photo by Ishara S. KODIKARA / AFP)

Colombo, Sri Lanka — A Chinese-funded tax-free enclave billed as Sri Lanka’s answer to Dubai and Singapore cleared the final legal hurdle Tuesday as the Supreme Court in Colombo ruled it could go ahead with only minor tweaks.

The largest single foreign investment in Sri Lanka is one of several massive Asian infrastructure projects funded by China as Beijing increases its regional footprint.

Project officials have said they hope the brand new “Port City,” an area of reclaimed land, will attract billions of dollars for trade, banking, and offshore services similar to what is available in Dubai and Singapore, two of its potential competitors.

Named the “Colombo Port City” because of its proximity to Colombo’s main harbor, the sea reclamation — carried out with considerable Chinese labor — completed in 2019 has doubled the size of Colombo’s financial district by adding 269 hectares (665 acres).

Under the proposed legislation expected to be passed by Sri Lanka’s parliament on Thursday, the Port City will be administered by a commission with unprecedented powers to fast track investment approvals.

All transactions within the Port City will be denominated in foreign currency and all salaries earned by any worker will be tax-exempt.

US ambassador Alaina Teplitz told reporters last month that an unintended consequence of the Port City could be “a haven for money launderers and other sorts of nefarious actors.”

However, the Supreme Court noted that “laws which seek to prevent money laundering and terrorist financing… apply within the area of authority of the Colombo Port City.”