Senators on Enrile advice on China: ‘Yes to friendly ties, no to surrender’ 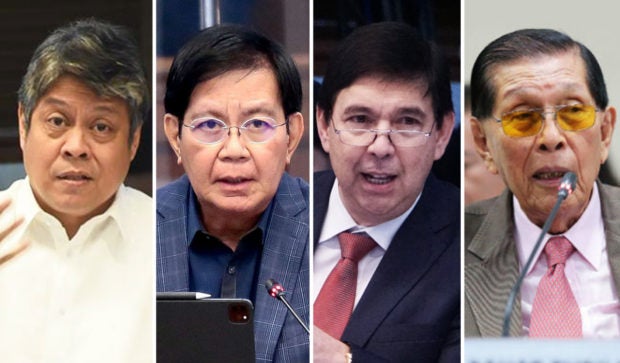 MANILA, Philippines — Although several senators agreed that the Philippines should maintain diplomacy with China on maritime issues, they said other options should not be overlooked in affirming the country’s claims in contested areas.

“It’s one thing to be friendly and diplomatic, it’s another thing to be subservient and tikom ang bibig or nananahimik or magsusunod sunuran [or to keep silent and be submissive],” he added.

“Instead of making China as a foe or irritate China, why don’t we befriend China without surrendering our rights?” said Enrile, who Duterte invited to speak with him on issues concerning the West Philippine Sea, particularly on the 2012 standoff between Manila and Beijing in Scarborough Shoal.

Reacting to Enrile’s inputs on the West Philippine Sea issue, Senator Panfilo Lacson agreed with the former Senate president that the country should “not abandon whatever dealings or negotiations with China are underway or in the pipeline as we speak.”

“Diplomacy should be our first, if not best, option. But neither should we disregard other options available, not only to finally resolve the West Philippine Sea issue but to provide the balance of power in the Indo-Pacific region,” said Lacson, chairperson of the Senate national defense committee.

He reiterated his suggestion for the Philippines to build stronger alliances with countries, which have powerful military capabilities and are “willing to help our cause as it would also advance their own national interests if they maintain their presence alongside our naval assets in the vicinity of the WPS.”

“That said, it bears repeating that the initiative should come from a united Filipino people with a united stand – not the continued bickering that only the Chinese government will applaud,” Lacson added.

Senate President Pro Tempore Ralph Recto, for his part, likewise said the Philippines should work with its allies, such as the United States.

“The fact is China has encroached on our EEZ and has built military outposts. It plans to build more. It has destabilized the region and has taken away the livelihood of our fishermen and other natural resources available to Filipinos,” Recto said in a statement.

“We will have to work with our allies (US) and others who share similar [interests] and values of a rule-based order. It is in the interest of most nations to uphold our [United Nations Convention on the Law of the Sea] victory. We can maintain trade relations with China at the same time,” he added.

In 2016, the United Nations-backed Permanent Court of Arbitration in The Hague, Netherlands invalidated China’s expansive claims in the South China Sea, including the West Philippine Sea. Beijing refuses to recognize the said ruling.

Bilateral talks ‘are the way to go’

Senator Imee Marcos, meanwhile, believes that the maritime spat between Beijing and Manila becomes “a less urgent international issue” compared to recent events like the escalating conflict between Israeli security forces and Palestinian militants and the military dictatorship power grab in Myanmar.

READ: 35 killed in Gaza, 5 in Israel, as violence escalates

“Clearly, bilateral negotiations are the way to go. The fact that China has not retaliated with economic sanctions nor withdrawn its vaccine diplomacy proves that communication is robust and ongoing, and should be encouraged,” she added.