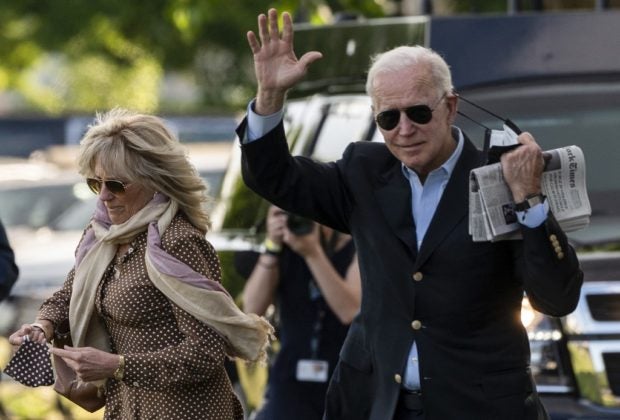 US President Joe Biden waves and removes his mask as he walks with US First Lady Jill Biden to Marine One on the Ellipse near the White House in Washington, DC on May 15, 2021. Photo by ANDREW CABALLERO-REYNOLDS / AFP

WASHINGTON — President Joe Biden and his wife Jill earned just over $600,000 last year, their tax return showed Monday, though the real news was that the document got released at all.

Presidents have traditionally made public their annual tax returns, which detail sources of income and taxes paid, in the name of transparency.

Donald Trump famously broke with this, refusing during his one-term presidency to come clean about his finances or the true state of his property and branding empire.

In their joint tax return for 2020, Biden and his wife Jill, a community college professor, reported federal adjusted gross income of $607,336.

Biden’s number two, Vice President Kamala Harris, is several rungs above him on the financial ladder.

Emhoff was a high-profile entertainment industry lawyer and took a leave of absence from his firm when Harris was named Biden’s running mate.

The tax returns confirm one thing: both the first and second families could be paying more in taxes if Biden gets his massive American Families Plan education and social spending package passed by Congress.

Under current proposals, the plan would be funded in part by raising the tax top rate for the most wealthy Americans. Those earning less than $400,000 a year, Biden says, would see no increase.

Read Next
Another death among COVID-stricken cops brings total to 62
EDITORS' PICK
Communication woes postpone Bongbong Marcos’ radio interview
Step up your vlog game with vivo’s newest smartphone
NUSTAR Resort and Casino: Cebu’s next lifestyle and leisure gem
Rise to perfection: Spot on tiles for your stair risers
80% of of vaccinated adult Filipinos willing to get COVID booster shot, survey shows
COVID-19 cases in NCR, nearby provinces now going down — OCTA
MOST READ
Leni mansplained? Abunda ‘interruptions’ stir own buzz
6 areas to be placed under Alert Level 3 from Jan. 28 to Feb. 15
Communication woes postpone Bongbong Marcos’ radio interview
Gordon tells Duterte: I did not steal from Subic funds
Don't miss out on the latest news and information.