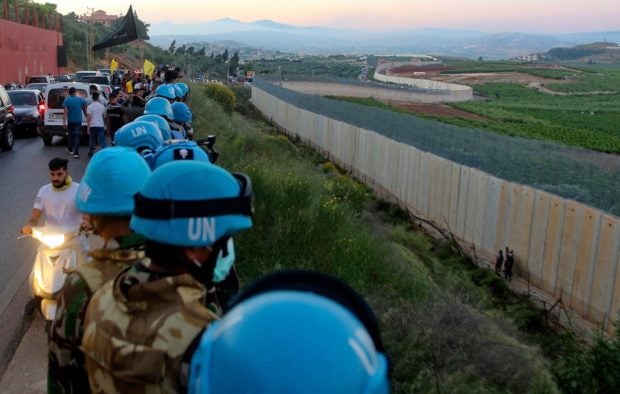 United Nations peacekeeping force in Lebanon (UNIFIL) soldiers stand along the border wall with Israel, in the Lebanese village of Adaiseh, on May 15, 2021.  Three rockets were launched from Syria two days ago, while Israel’s army said it fired “warning shots” towards potential infiltrators from Lebanon. (Photo by Mahmoud ZAYYAT / AFP)

JERUSALEM — The Israeli army said it launched artillery towards Lebanon on Monday in response to rocket fire from the neighboring country that failed to hit the Jewish state.

“Six failed launch attempts were identified from Lebanon that did not cross into Israeli territory,” the army said in a statement.

“Artillery forces fired toward the sources of the launches.”

A Lebanese military source told AFP three rockets had been fired from Southern Lebanon towards Israel.

“Three Grad-type rockets were fired from the Shebaa Farms area,” not far from the Israeli border, the Lebanese military source said.

“The situation in the area is now calm,” tweeted the UN peacekeeping mission in southern Lebanon, which is in contact with both countries, several hours after the rocket fire.

It is the second time rockets have been launched from Lebanese territory towards Israel since hostilities flared between the Jewish state and armed Palestinian groups in the Gaza Strip last week.

Last Thursday, three rockets were fired from southern Lebanon near the Palestinian refugee camp of Rashidiyeh toward Israel, a Lebanese military source said. Israel’s army said those rockets had landed in the sea.

A source close to Israel’s arch-enemy Hezbollah said the Lebanese Shiite group had no link to the incident.

Protests have also been held against Israel’s air campaign on Gaza, with a Lebanese demonstrator killed by Israeli fire last week during a rally in the border area. 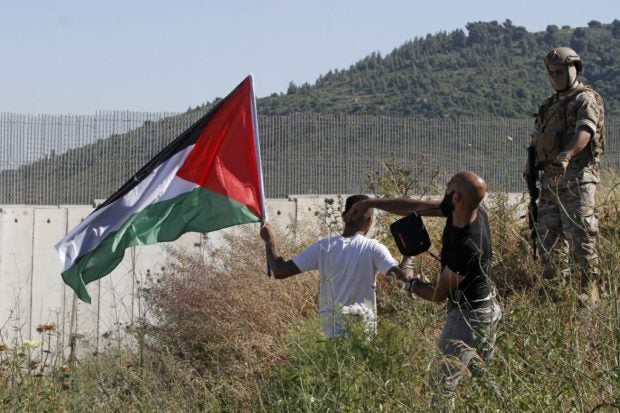 Pro-Palestinian protesters hurl rocks across the separation wall during a rally in the southern Lebanese village of Kfar Kila on May 15, 2021, marking the Nakba and denouncing Israeli violence in Gaza and Jerusalem (Photo by Mahmoud ZAYYAT / AFP)

That came after a number of young demonstrators had tried to cross into the northern Israeli border town of Metula, according to Lebanese state media.

The Israeli army said Monday that in recent days it had “spotted a number of Lebanese suspects approaching the security fence” and damaging it.

“The IDF views any attempt to breach Israel’s sovereignty with great severity, and will continue to operate in both overt and covert ways in the area,” it said in a statement.

Over 200 people have been killed in the exchange of fire between Israel and armed groups in the Gaza Strip, a Palestinian enclave controlled by Islamists Hamas.

That was in response to bloody Israeli police action at the flashpoint Al-Aqsa mosque compound in Jerusalem, as well as a crackdown on protests against the planned Israeli expulsion of Palestinians from their homes in the Sheikh Jarrah neighborhood in annexed east Jerusalem.