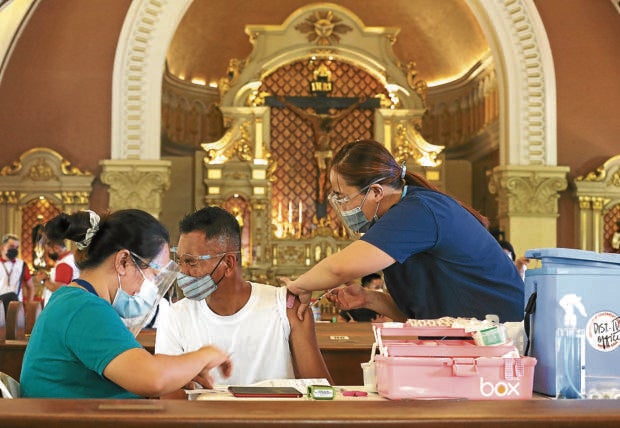 HOLY SITE The Sacred Heart of Jesus Parish Shrine in Kamuning, Quezon City, has been tapped as one of the vaccination centers in Metro Manila’s most populous city as the government seeks safe, spacious areas to speed up the country’s vaccine rollout.—NIÑO JESUS ORBETA

MANILA, Philippines — Two more senators and a health advocate have urged the government to start vaccinating economic front-liners to accelerate the COVID-19 immunization program that has been slowed down by vaccine hesitancy and too much bureaucracy.

Even with more available doses, lawmakers noted that the slow pace of the vaccination has put in doubt the national government’s target to reach herd immunity by the end of the year.

Vaccination chief Carlito Galvez Jr. earlier said the government aimed to inoculate up to 50 million people by September to reduce hospitalization and death and as many as 70 million by November to contain the virus spread.

Sen. Sherwin Gatchalian cited the case of his home city, Valenzuela, where only 20 percent of its eligible population had signed up since the registration started two months ago and only 19 percent of the elderly group showed up for a shot.

“[The Inter-Agency Task Force for the Management of Emerging Infectious Diseases]should bump up all A4s and allow [the] general public to be vaccinated,” Gatchalian said in a tweet on Monday.

Gatchalian said that given the current pace, “we will not hit [at least] 50 million herd immunity by [the] end of the year. Vaccines will also spoil.”

The A4 category in the vaccination priority list refers to economic front-line workers such as public transportation drivers, security guards and market vendors. The vaccination plan currently covers the top three priorities—healthcare workers, seniors and persons with medical conditions.

Sen. Nancy Binay last week also urged the Department of Health (DOH) to consider vaccinating the A4 group with the 2 million doses of AstraZeneca from COVAX, a global initiative to help countries access COVID vaccines. This is made urgent by the fact that about 1.5 million doses are due to expire on June 30 and the rest on July 31.

In a television interview on Monday, Sen. Richard Gordon said he agreed with the proposal to accelerate the priority list since the A4 sector was also considered pandemic front-liners.

“Let’s do away with the bureaucracy in vaccination. We have to really vaccinate left and right,” Gordon said.

By bureaucracy, Gordon meant the prevaccination screening, such as checking for vital signs, which the DOH last week scrapped to cut the waiting time.

Gordon said the country needed to increase its daily vaccination to 240,000 and finish in one and a half years.

Leachon was suggesting to administer the government-purchased Sinovac vaccines, which are not covered by the COVAX guidelines, to the A4 population.

He added: “We must revisit our strategic plan. If priority listing is not working, why is the government pursuing this plan? Clearly the vaccination program is slow and we need to recalibrate.”

President Rodrigo Duterte’s Cabinet already had an “extensive discussion” with the private sector on how to accelerate the vaccination drive, according to Finance Secretary Carlos Dominguez III. He said Galvez and Palace spokesperson Harry Roque were expected to make announcements either on Monday night or Tuesday.

As of Monday, the government said it had administered 2.2 million as a first dose and 714,432 as a second dose out of the 7.7 million vaccines received since March.

A DOH source on Monday said around 400,000 Sinovac doses remained in the storage facility awaiting a certificate of analysis prior to its deployment to local governments to make sure all vaccines delivered to the Philippines were of good quality.

However, infectious diseases expert and vaccine expert panel member Dr. Rontgene Solante said that “as much as we want the economic front-liners to be vaccinated, we need to follow the priority list (A1 to A3) because of the benefits [for] these population—prevention of mortality and severe cases.”

Figures from Our World in Data showed that among 13 Asia-Pacific countries, the Philippines lagged behind in vaccinations per 100 people, better only than Taiwan. Leading mass inoculation in the region were Singapore, China, Hong Kong, India and Australia with more than 10 per 100 of their citizens already vaccinated.