MANILA, Philippines — President Rodrigo Duterte and former Senate President Juan Ponce Enrile questioned on Monday the role of former Sen. Antonio Trillanes IV in the negotiations between the Philippines and China during the 2012 standoff at Scarborough Shoal.

During Duterte’s taped public address, Enrile recalled a meeting he had with then President Benigno Aquino III, then Foreign Affairs Secretary Albert del Rosario, and Trillanes during which it was revealed that Trillanes had been talking to officials of China about Scarborough Shoal.

Enrile said he then warned Aquino to be wary of such actions by Trillanes. He also questioned how Trillanes secured a connection with Chinese officials and how he acquired his influence over them.

“Maybe we should find out where Trillanes got his connections with Beijing. How was able to have connections there? I myself was a guest in Beijing, but I had no connections like Trillanes had,” Enrile said in Filipino.

Aquino probably had no connections either, Enrile added.

“That’s still a mystery up to now for which we need to find an answer,” he said. 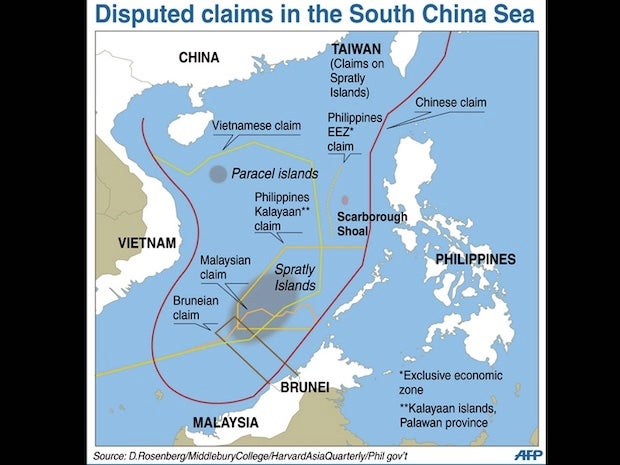 Scarborough Shoal is one of the disputed areas in the South China Sea. (Image from Agence France-Presse)

For his part, Duterte said he was baffled why Aquino designated a military man such as Trillanes to engage in back-channel talks with China.

According to him, Trillanes had gone to China 16 times, and shortly after his 16th visit, the Philippines lost possession of Scarborough Shoal.

Enrile did not answer this but instead offered more questions.

“The mystery to me was why Trillanes and not someone else? Why was Trillanes directed as the negotiator for Aquino and where did Trillanes get the influence over some authorities in Beijing in those days?” he asked.

“I think he should explain to the nation how he got that kind of influence to be able to reach out to the higher-ups in China,” he added.

Enrile also claimed Trillanes had bypassed the Philippine embassy in China and Del Rosario in his back-channeling with China.

Duterte said Filipinos should demand the truth, if not from Trillanes then from the people involved in foreign affairs during that time.

The Scarborough Shoal incident began in April 2012, when the Philippine Navy tried to apprehend Chinese fishing vessels at the shoal but were blocked by Chinese marine surveillance ships.

Duterte said he would want to know what or who prompted Aquino to retreat from the shoal.