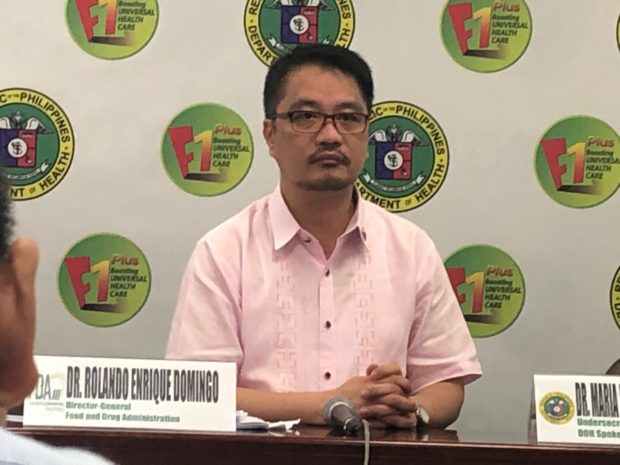 During the hearing of the House committee on good government and public accountability on the policies of the FDA and the Department of Health (DOH), Deputy Speaker Lito Atienza questioned Domingo’s absence from the investigation.

“My purpose in asking is that we are in hot pursuit of certain issues with the decision of the Director-General. By conveniently taking a leave, would Congress allow this and not only for this particular position but for future inquiries?” Atienza said.

“By the convenient way of taking a leave, can they avoid congressional inquiry on their official decisions? Would we allow that later on?” he added.

In response, Aglipay, who chairs the committee, said that the committee will not allow absences but noted that Domingo was on one-month leave due to his father’s illness.

“In this particular case I was informed, it is because of a personal matter. His father is sick, and he has filed a one-month leave because of this,” Aglipay said.

“I think he is the last person who will avoid an inquiry, given his previous attendance in various committees and various inquiries,” he added.

Atienza, however, said that the committee will not “get into the habit of allowing persons who are being questioned.”

“These are official instead of official positions that were being made and the alternates can conveniently say, ‘we have no knowledge of this and therefore, the inquiry will not be able to move,” Atienza said.

INQUIRER.net has sought Domingo’s comment but has yet to receive a reply as of posting time.