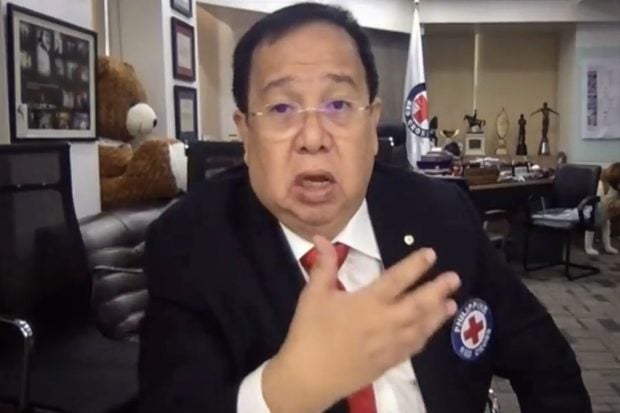 MANILA, Philippines — To speed up the rollout of vaccines, health officials should relax the rule on prescreening people to be inoculated against COVID-19, Sen. Richard Gordon said in a statement over the weekend.

The senator expressed “deep concern” about the prospect of vaccine doses going to waste—particularly the AstraZeneca jabs donated through the Covax global-sharing facility.

While he said he understood the protocols set by the Department of Health (DOH) to avert any side effects, he said “such protocols may be relaxed.”

Instead of prescreening, postvaccination care may be provided to vaccinees who may experience side effects, Gordon said, citing the protocol in the United States.

“Those getting vaccines do not spend long waiting hours and are just given a hotline or a number which they can call should they experience some serious side effects,” the senator added.

“To avoid letting the vaccines expire, the government can immediately deliver the vaccines to the PRC and allow its volunteer doctors and nurses to administer the vaccines quickly and safely,” Gordon also said, referring to the Philippine Red Cross of which he is chair and CEO.

Health Undersecretary Maria Rosario Vergeire had earlier said that 1.5 million doses of the AstraZeneca jabs are due to expire on June 30, while another 500,000 would expire the following month.

But Health Secretary Francisco Duque III assured the public last week that all doses would be promptly administered.

On Thursday, vaccine czar Carlito Galvez Jr. said the 1.5 million doses expiring on June 30 would be used up by June 15.

“We have no problem, do not worry. Our logistics can handle it,” he said.

As of last week, only 2.5 million doses—out of the 7.78 million vaccines delivered to the country as of May 12—had been administered to Filipinos, according to the DOH.

Vergeire said less than 1 percent of COVID-19 vaccines delivered to the country have been lost to wastage.

According to her, the vaccine wastage was at 772 out of the 7.78 million doses delivered to the country.

This is .0099 percent, far below the government’s acceptable limit of 5 percent for the amount of vaccines rendered unfit for use, she said.

“When it comes to wastage, we are still within the target for wastage, which is just less than 5 percent as of now,” Vergeire said at Saturday’s Laging Handa briefing.

The DOH, however, said the low number of confirmed cases was due to the low output of testing laboratories as of Friday.

There were 140 more deaths—with nearly two-thirds or 90 previously declared as recovered, under the DOH protocol of initially declaring mild and asymptomatic cases as recovered after two weeks.

Of the 36,318 people who were tested last Friday, 13.2 percent tested positive for the SARS-CoV-2 virus that causes the disease.