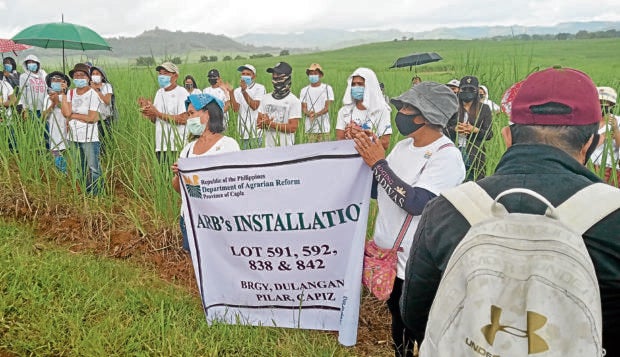 OUR LAND Agrarian reform beneficiaries in Pilar town, Capiz province, formalize on May 11 their possession of land granted to them by the government more than 23 years ago. —PHOTO COURTESY OF TASK FORCE MAPALAD

ILOILO CITY, Iloilo, Philippines — A total of 175 farmers in Capiz province were finally installed on land totaling 188 hectares awarded to them by the government more than two decades ago.

The Department of Agrarian Reform (DAR) led the installation of members of Montecarlo Agrarian Reform Beneficiaries Organization (Montecarba) on the properties in Pilar town in Capiz on Tuesday.

“We cannot fully express our happiness. After 23 years of suffering and waiting, we finally have the land that was awarded to us,” Teresita Billonid, Montecarba spokesperson, told the Inquirer in an online interview on Sunday.

The land beneficiaries fought for their installation amid the resistance of the now-deceased landowner Nemesio Tan and his heirs who sought the cancellation of the certificates of land ownership award (CLOA) issued to the farmers and stop the property from being subjected to agrarian reform.

On June 29, 2020, the Office of the President dismissed the petition of Tan’s heirs to cancel the CLOA.

Malacañang’s order also upheld the May 15, 2017, order of then Agrarian Reform Secretary Rafael Mariano that declared that while the 1997 issuance of the CLOA violated procedures under the comprehensive agrarian reform law, the landholding was still validly covered by agrarian reform.

Lawyer Maria Cecilia Maquirang, who represents the farmers, said they offered the farmers’ victory to the memories of Orlando Eslana and Eliseo Banico.

“We thank the sacrifices of the wounded Melinda Arroyo, Ana Bocala, Nida Castillano Amo and Adel Vergara,” she said.

Banico died of natural causes in one of the campouts of the land beneficiaries to press for their installation.

Eslana died on Feb. 11, 2017, when armed men fired at 68 beneficiaries who occupied part of the property in Pilar town due to the failure of the DAR to install them.

Four others were wounded including Arroyo, Eslana’s sister, who remains paralyzed with a bullet still embedded in her head.

“We have been given justice after years of oppression,” Billonid said.

She also thanked the farmers federation Task Force Mapalad that supported their struggle to have their own land.