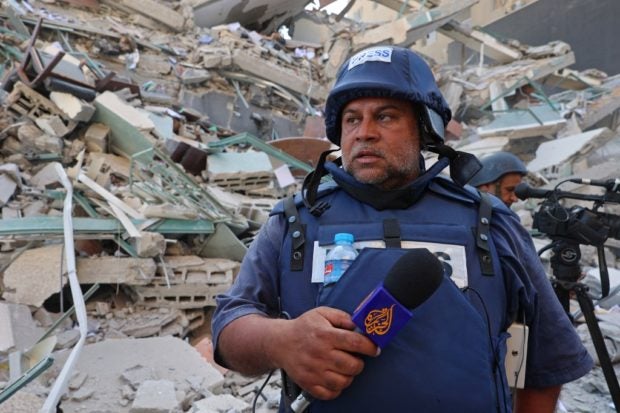 Al-Jazeera journalists stand next to the rubble of Jala Tower, which was housing international press offices, following an Israeli airstrike in the Gaza Strip on May 15, 2021. An Israeli air strike demolished the 13-floor building housing Qatar-based Al-Jazeera television and American news agency The Associated Press in the Gaza Strip. Photo by MOHAMMED ABED / AFP

MONTREAL — Canada on Saturday stressed “the fundamental importance of protecting journalists” following an Israeli attack on a building housing international media in Gaza, and called for “immediate steps” to end the violence.

Foreign Minister Marc Garneau said Canada was following the situation in Israel, the West Bank and Gaza “with grave concern” and urged “all parties to take immediate steps to end the violence, deescalate tensions, protect all civilians, refugees, journalists and media workers.”

He reiterated “the fundamental importance of protecting journalists,” stressing they “must be free to do their work.”

“Their safety and security must always be ensured,” he said on Twitter.

In Gaza, an Israeli air strike on Saturday flattened the 13-floor building housing Qatar-based Al Jazeera and The Associated Press news agency following a warning from the Israeli army to evacuate the tower.