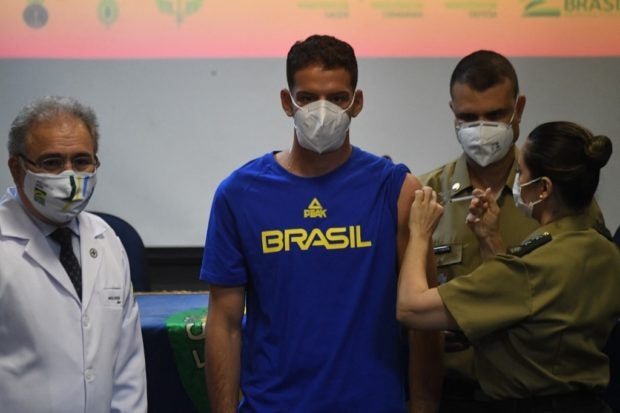 Brazilian bow and arrow athlete Marcus Vinicius D’Almeida is inoculated with a COVID-19 vaccine next to Brazil’s Health Minister Marcelo Queiroga, as part of a project organized by the Brazilian federal government to vaccinate Brazilian citizens accredited to the Tokyo Olympic Games amid the COVID-19 pandemic in Rio de Janeiro state, Brazil, on May 14, 2021. Photo by MAURO PIMENTEL / AFP

Around 33 million people — 15 percent of the population — have received at least one vaccine dose in Brazil, a proportion still too small to have a substantial impact on the virus’ spread.

Targeted by a Senate inquiry over its handling of the pandemic, President Jair Bolsonaro’s government is facing criticism for failing to secure more vaccines, including its refusal of offers to purchase millions of doses and diplomatic tension with China that may be slowing the import of vaccine ingredients.

“We don’t have enough doses right now to vaccinate as fast as we should,” said Margareth Dalcolmo, a pulmonologist and researcher at leading public health institute Fiocruz.

“We ought to be vaccinating younger people already, especially given that younger demographic groups are currently driving transmission,” she told AFP.

But first, Brazil still has to vaccinate 80 million people from high-priority groups, including the elderly, indigenous people and health workers.

Vaccine doses meanwhile continue to arrive in a trickle — although the government maintains it will be able to vaccinate all adults by the end of the year.

Brazil has lost more lives to Covid-19 than any country except the United States — more than 430,000 — and has one of the highest death tolls per capita in the world.

Though the current wave has eased somewhat since April, the virus is still killing a staggeringly high number of people in the country — nearly 2,000 a day.

Despite its huge size, the South American country is known for executing turbo-charged vaccination campaigns.

In 2010, Brazil vaccinated more than 80 million people against H1N1 — the swine flu virus — in less than three months.

“We need to be vaccinating two million people a day,” said Dalcolmo.

As it stands, Brazil has rarely managed more than one million Covid-19 shots a day.

“We’ve gotten better since the start of the year, but we’re still a long way from where we need to be,” said Joao Viola, president of the Brazilian Immunological Society’s scientific committee.

Brazil started out using two vaccines, Oxford/AstraZeneca’s and Chinese-developed CoronaVac, both of which it has licenses to produce locally.

The drive got a boost last month with the arrival of the Pfizer vaccine. But only about two million of the 100 million doses Brazil has ordered have been delivered so far.

Brazil could have secured more Pfizer doses faster, but Bolsonaro’s government refused an offer last August to purchase more than 70 million of them.

The far-right president, who has persistently snubbed expert advice on handling the pandemic, joked that the vaccine could “turn you into an alligator” — only to change course months later and allow a deal with the US pharmaceutical giant.

“Worldwide demand for vaccines is very high, so those who were slow to sign deals are receiving their orders later,” said Viola.

Bolsonaro, whose government often has strained relations with China, also refused to purchase CoronaVac, calling it the vaccine from “that other country.”

But a political opponent, Joao Doria, governor of Brazil’s most populous state, Sao Paulo, pursued a deal for CoronaVac anyway.

The vaccine now accounts for more than 70 percent of the doses administered in Brazil.

However, the public health center manufacturing it in Brazil, the Butantan Institute, announced Friday it would have to halt production because it had run out of the active ingredient, which has to be imported from China.

Brazil is due to start producing the active ingredient for CoronaVac itself, but only in September.

The Butantan Institute said “diplomatic problems” could prevent it from delivering new doses in June.

Last week, Bolsonaro provoked China by saying it may have created the novel coronavirus in a lab to wage “germ warfare.”

“There are 10,000 liters (of active ingredient for CoronaVac) ready, just waiting for the Chinese government to authorize shipment,” said Doria.

“But every time someone here makes a disparaging remark about China, that clearly makes it more difficult.”