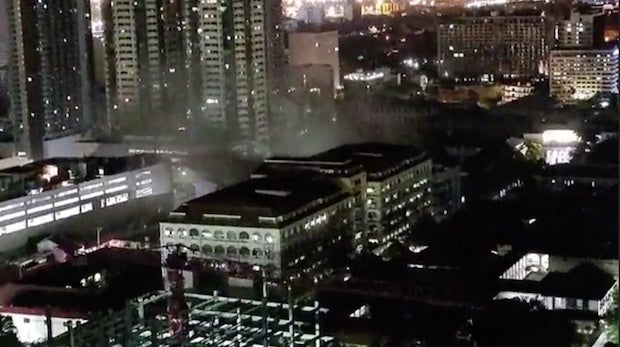 Smoke billows out of the Philippine General Hospital as fire hit it at around 1 a.m. on Sunday, May 16, 2021. (Photo from a video posted on Facebook by NURSE BANGZ)

MANILA, Philippines (Updated; originally published at 2:10 a.m.) — A fire broke out on the third floor of the Philippine General Hospital (PGH) on Taft Avenue in Manila, which lasted for almost five hours Sunday, the Bureau of Fire Protection (BFP) reported.

BFP Senior Inspector Hector Agadulin reported that the fire, which started at the third floor, where the supply area of the operating room is located, reached the second alarm at 12:58 a.m. and was raised shortly after 1:00 a.m. to the third alarm.

The fire was put under control at 2:46 a.m. and was extinguished at around 5:41 in the morning, Agadulin added.

The PGH is the country’s biggest COVID-19 referral hospital.

Several patients in PGH were evacuated and transferred to nearby district hospitals in Manila, according to its directors.

Dr. Karl Laqui, director of Ospital ng Maynila, reported that two patients from PGH transferred to their hospital for appendectomy.

The BFP said there are no reported casualties or injuries in the fire.

The fire caused damages worth P300,000 and the cause of fire is still under investigation, the BFP added.

Shortly after the incident, the PGH ordered all of its staff and patients to wear KN95 masks — which filters out 95 percent of airborne particles like dust and ashes — for the next 48 hours.

The hospital is also asking for cash donations after the fire.

Posted by Philippine General Hospital on Saturday, May 15, 2021

Below is a video with a brief account posted on Facebook by Nurse Bangz, or Christian Roy M. Bangloy, a nurse at the PGH.