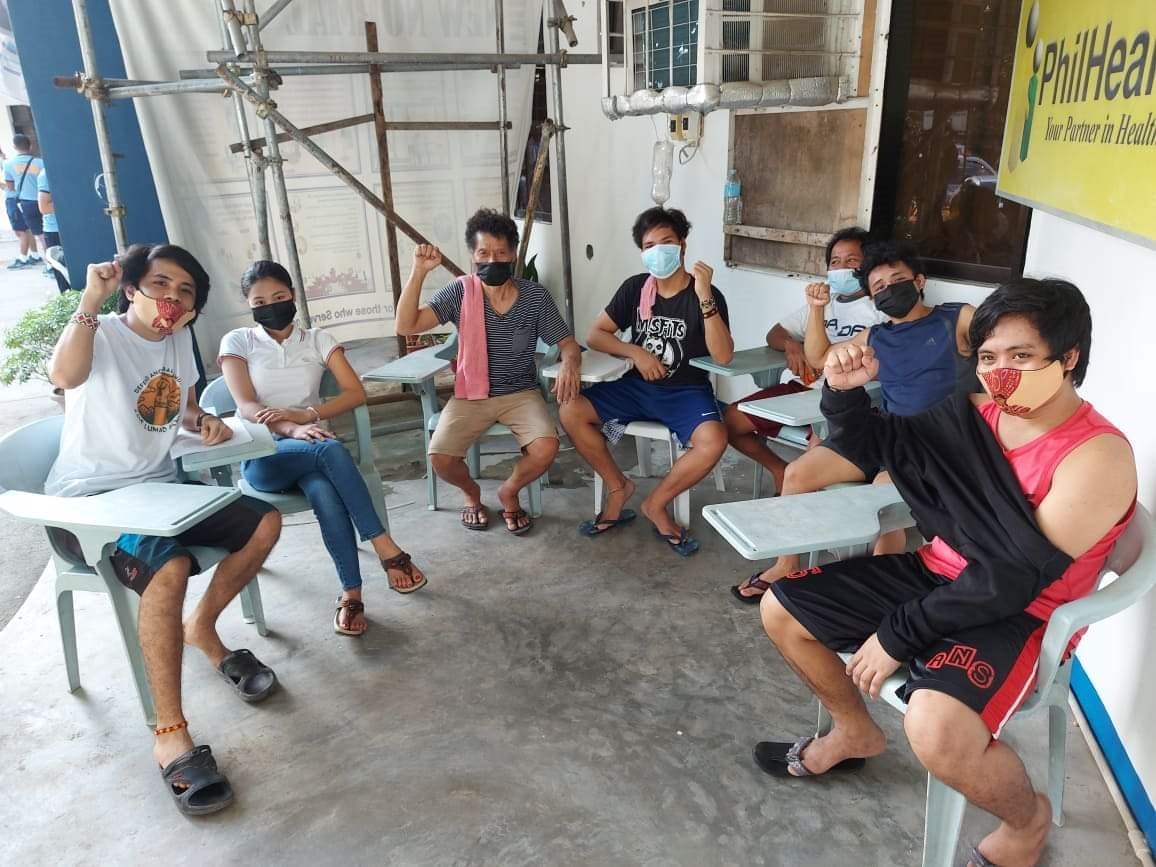 FREED The seven detainees collectively known as “Bakwit School 7” are released from police custody on Friday after the Davao del Norte prosecutor’s office dismissed the charges against them for allegedly recruiting 19 minors to be “child warriors.” —NESTLE SEMILLA

CAGAYAN DE ORO CITY — The Office of the Provincial Prosecutor in Davao del Norte has dismissed charges against seven persons arrested in Cebu City on Feb. 15 for the alleged kidnapping, trafficking, and abuse of “lumad” (indigenous) children.

Collectively known as the “Bakwit School 7,” they were released from various police detention centers in Cebu City around 6 p.m. on Friday on the strength of a release order signed by provincial prosecutor Norman Solis.

They were arrested for allegedly recruiting and training at least 19 minors to be “child warriors” of the Communist Party of the Philippines and its armed wing, the New People’s Army.

In a resolution dated May 5 but was received by the seven only last Tuesday, the prosecutors dismissed the case for being outside their jurisdiction, insufficiency of evidence, and lack of probable cause.

The National Union of Peoples’ Lawyers (NUPL) in Cebu, through its spokesperson King Anthony Perez, said the dismissal of the charges validated its stand that state forces’ persistent Red-tagging of the lumad were baseless and unfounded.“The indigenous peoples and their leaders have been victims of state terrorism because of their long history of struggle against the exploitation of their ancestral lands,” Perez said.

The seven were arrested by police during a raid on the Bakwit School in the SVD retreat house inside the University of San Carlos-Talamban Campus (USC-TC).

They were accused of bringing 19 lumad children to Cebu City without the consent of their parents and indoctrinating them in communism.

Police supposedly rescued the children and turned them over to government social workers.

Classes had been held for the children in the Bakwit School since October 2019. They used to be students of a school run by the Salugpungan Ta Tanu Igkanugon Community Learning Center in Barangay Palma Gil, Talaingod.

In the course of the government’s crackdown on insurgency, the Salugpungan schools in the Davao region were closed, and the teachers felt threatened. The learning center moved to another location and eventually ended up in Cebu, supported by, among others, the Archdiocese of Cebu.

The NUPL’s Perez said the raid on the Bakwit School had been “intended to instill fear in and thwart resistance by Filipinos grown frustrated and restless with the administration’s antipoor and antipeople policies.”

He said that since there were no pending cases against the seven, it was imperative that they be released immediately. Earlier on Friday, Brig. Gen. Ronnie Montejo, director of the Central Visayas police office, said the formal order had yet to be received from the prosecutor’s office in Davao del Norte.

“We have yet to validate if the cases against the respondents were really dismissed,” he said in an interview.

Perez appealed to authorities to end “the militarization in indigenous communities, the exploitation of their ancestral lands, and the continued violation of the rights of the lumad.”

“We also enjoin every Filipino to denounce the government’s Red-tagging campaign, which has been used to justify cracking down on human rights defenders and lawyers. We continue to assert that no amount of terror and intimidation will ever silence the people’s movement,” he said.

In Manila, lawmakers are demanding accountability from the Central Visayas police office for its raid on the Bakwit School.

“Oppression of any Filipino’s right to life, liberty, and education must stop now. [T]here should be someone accountable for this,” House Deputy Speaker and 1-Pacman Rep. Michael Romero said a statement.

Romero, who delivered on Feb. 17 a passionate privilege speech on the raid, warned law enforcers “from doing any of the same acts rightfully dismissed by the Department of Justice in the actions taken against the lumad in Cebu City who came from Davao.”

He urged Philippine National Police chief Gen. Guillermo Eleazar and Defense Secretary Delfin Lorenzana “to immediately issue new and strong guidelines to troops in the field on actions taken against the lumad…”

Romero thanked Justice Secretary Menardo Guevarra and prosecutor Solis “for their commitment to champion the rule of law and human rights.”

He assailed rogue police officers for carrying out warrantless arrests “to merely get an accomplishment report or promotion at the expense of anybody, even innocent Filipino lives.”

Romero vowed to “name all those who are involved in this unlawful and unconstitutional act” in another privilege speech he would deliver when Congress resumes session on May 17.

House Deputy Minority Leader and Bayan Muna Rep. Carlos Isagani Zarate said the dismissal of the charges affirmed the lumad evacuees’ assertions that these were “baseless, malicious and part of the systematic vilification, discriminatory and vicious campaign by the government.”

Zarate slammed the efforts of the National Task Force on Ending Local Communist Armed Conflict (NTF-Elcac) to “silence the collective voice of the Lumad who are fighting for their rights and defending their ancestral lands.”

“We demand their immediate release and make those responsible for their unjust incarceration accountable,” he said.

His colleagues in the Makabayan bloc, Bayan Muna Rep. Eufemia Cullamat, and Kabataan Rep. Sarah Jane Elago, agreed that the Central Visayas police and the NTF-Elcac were “accountable for the Red-tagging, harassment and illegal detention” of the Bakwit School 7.

—With a report from Julie Aurelio