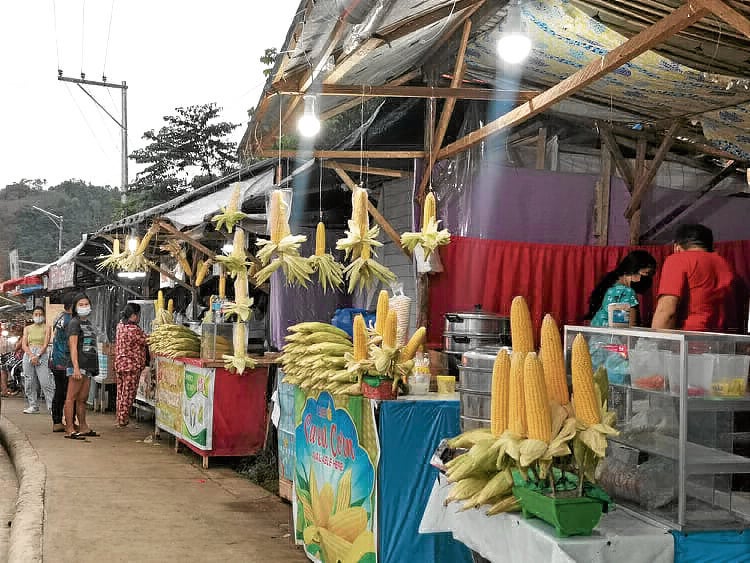 SLOW DOWN Business has slowed down for these popular snack stalls along Iligan City’s C3 road after the local government imposed limitations on the movement of people to curb the rise of COVID-19 cases. —DIVINA M. SUSON

CAGAYAN DE ORO CITY — Three key cities in Northern Mindanao and the Visayas have tightened restrictions amid the continued increase of COVID-19 cases in their localities.

The highly urbanized cities of Iligan and Cagayan de Oro in Northern Mindanao and Iloilo City in Western Visayas have tightened measures to control the rise of COVID-19 cases, which has been climbing since April. The Northern Mindanao region registered 307 new cases on Thursday, the highest single-day count since the pandemic began last year, with most of the new infections coming from both cities.

Cagayan de Oro has been battling a surge of infections for six weeks now, recording 849 active cases as of Friday. The spike has mostly been traced to social gatherings like birthday parties, outings, and attendance in wakes and funerals.

On Friday, Mayor Oscar Moreno ordered the imposition of an eight-hour curfew starting on May 15, running from 9 p.m. to 5 a.m, affecting the operations of shopping malls that normally close at 9 p.m.

Within the curfew period, the sale of liquor is banned.

Earlier, Moreno also ordered the regulation of the holding of wakes, allowing only 20 persons to visit at each time and decreeing that this will only be held up to three days.

In Iligan City, Mayor Celso Regencia imposed a seven-hour curfew from 9 p.m. to 4 a.m. starting on May 12 and limited movement outside the home to only essential purposes like buying food and medicine and accessing medical services.

Households will be issued color-coded passes that can only be used for three days in a week. Sundays are declared as “no-movement” days, with residents prohibited from going out except for medical emergencies and essential trips.

The city, which has been on general community quarantine, has seen a surge of cases in the last two weeks. As of May 13, it had 190 active cases or a 197-percent increase from the 64 cases on April 30.

The city police have also stepped up their drive against individuals who are not wearing masks and shields in public places. A local ordinance has set a fine of P1,000 for violators.

In Iloilo City, Mayor Jerry Treñas ordered on May 12 a ban on nonessential mass gatherings, or those for recreational or leisure purposes, effective 6 p.m. of May 12 until 11:59 p.m. of May 19.

The city health office has reported 309 active cases from May 1 to 11 in the city, at a daily average of 28 infections, the mayor said.

Treñas said dine-in services in food establishments and religious gatherings were allowed but attendance was limited to 30 percent of the venue’s capacity; weddings and baptisms could proceed with 30 percent of venue capacity or a maximum of 80 persons, whichever is lower.

The mayor also limited holding of wakes to three days and attendance to the immediate family members of the deceased and relatives up to the third degree of consanguinity.

Operation of public swimming pools was suspended and private offices were enjoined to operate within 30 percent of their on-site capacity.

Work in the city government has been reduced to 30 percent of the workforce.

Read Next
Big promises, few doses: Why Russia is struggling to make Sputnik V doses
EDITORS' PICK
Alex Eala wins Grand Slam on Independence Day: ‘I hope I made my contribution to the country’
COLUMN: Making the republic work
1Sambayan names 6 choices to pit vs Duterte’s annointed in 2022
COVID situation still ‘very fragile’ due to surge in regions – DOH
Ahead of ONE: Full Blast II, Mongkolpetch warns Elias Mahmoudi: ‘Watch out for my fists’
Kai Sotto continues to inspire Filipinos by sharing his passions and stories with Smart Prepaid
MOST READ
Nancy, Isko asked to pull out of 1Sambayan nomination, says Carpio
1Sambayan bares nominees for president, vice president in 2022 polls
1Sambayan names 6 choices to pit vs Duterte’s anointed in 2022
Robredo still undecided, making supporters uneasy
Don't miss out on the latest news and information.