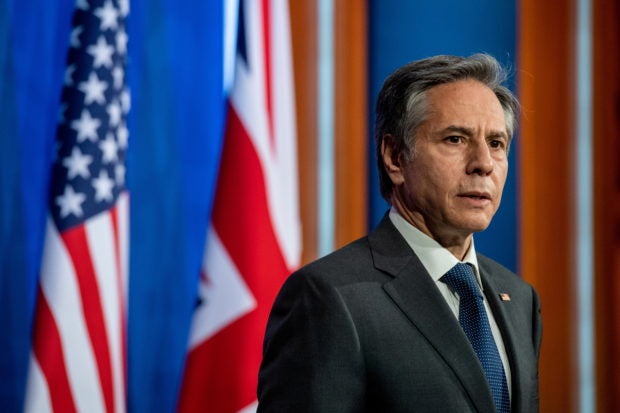 WASHINGTON – U.S. Secretary of State Antony Blinken said on Thursday that the United States would not leave Australia alone in the face of economic coercion from China, and that such behavior toward U.S. allies would hamper improvement in U.S.-Sino relations.

Washington has repeatedly criticized what it says are Beijing’s attempts to bully neighbors with competing interests, and U.S. President Joe Biden has sought to bolster ties with allies in the Indo-Pacific to counter China’s growing power.

“I reiterated that the United States will not leave Australia alone on the field, or maybe I should say alone on the pitch, in the face of economic coercion by China,” Blinken said at a press briefing with visiting Australian Foreign Minister Marise Payne.

“And we’ve made clear to the PRC how such actions targeting our closest partners and allies will hinder improvements in our own relationship with China,” Blinken said, using the acronym for the country’s official name.

China has imposed a series of trade sanctions on Australian exports ranging from wine to coal as the two countries tensions have worsened in recent years.

Successive Australian trade ministers have been unable to secure a phone call with Chinese counterparts since diplomatic tensions worsened in 2020, and last week Beijing suspended all activity under a bilateral economic dialogue with Australia.

Australia was one of the first countries to publicly ban Chinese tech giant Huawei from its 5G network over security concerns, and last year angered Beijing with its calls for an independent investigation into the origins of COVID-19.

Payne told journalists Australia had been clear that it wanted constructive ties with China.

“But we won’t compromise on our national security or our sovereignty and we’ll continue to act to protect that,” she said.

Read Next
Death toll from Israeli strikes on Gaza rises to over 100 – ministry
EDITORS' PICK
PH logs 7,302 new COVID-19 cases — DOH
Taguig exceeds daily COVID-19 vaccination target of 6,800 individuals for 3 days
Robredo urges supporters: Don’t think we’re the only ones who are good
Alex Eala wins Grand Slam on Independence Day: ‘I hope I made my contribution to the country’
Ahead of ONE: Full Blast II, Mongkolpetch warns Elias Mahmoudi: ‘Watch out for my fists’
Kai Sotto continues to inspire Filipinos by sharing his passions and stories with Smart Prepaid
MOST READ
China cautions G7: ‘small’ groups don’t rule the world
Leni vs. Sara
PH to have cloudy, rainy Monday — Pagasa
Netanyahu’s tenure ends as new Israeli government wins majority vote
Don't miss out on the latest news and information.