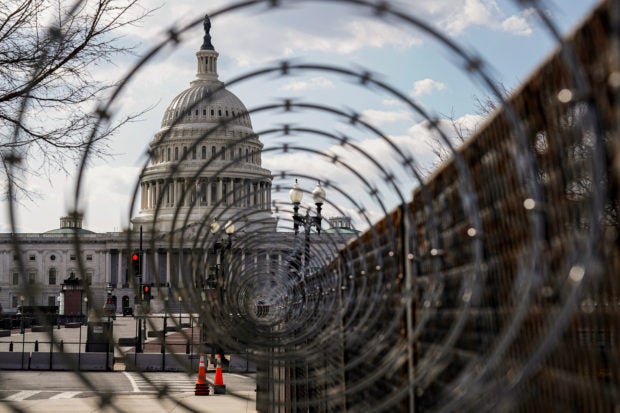 FILE PHOTO: The U.S. Capitol is seen through razor wire after police warned that a militia group might try to attack the U.S. Capitol in Washington, U.S., March 4, 2021. REUTERS/Joshua Roberts/File Photo

WASHINGTON — A U.S. Marine Corps major is the first active-duty member of the military charged with taking part in the deadly January 6 attack on the U.S. Capitol, federal prosecutors said on Thursday.

The Justice Department said Christopher Warnagiris, 40, a Marine Corps major from Woodbridge, Virginia, has been charged with federal crimes, including obstructing law enforcement officers during civil disorder and obstruction of justice. The FBI said Warnagiris has been stationed since last summer at the Marine Corps base at Quantico, Virginia.

A law enforcement official said Warnagiris is believed to be the first active-duty U.S. military officer to be charged in connection with the January 6 riot. The official said that about 40 U.S. military veterans also have been charged, as well as four military reservists.

The Justice Department said court documents and security camera footage show that Warnagiris violently entered the Capitol by pushing through a line of police guarding the building. Once inside, the FBI said in an affidavit, Warnagiris positioned himself in the corner of a doorway and used his body to keep the door open and pull others inside. When a U.S. Capitol Police officer tried to pull the doors shut, Warnagiris refused and continued pushing it open, the FBI said.

The Justice Department said Warnagiris would make his initial court appearance Thursday afternoon before a federal court in Alexandria, Virginia.