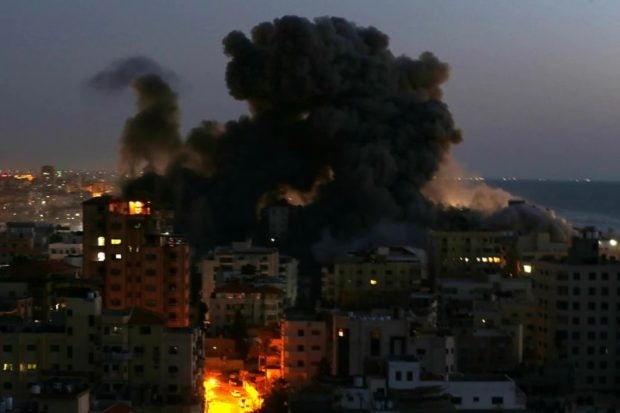 Smoke rises from a building after it was destroyed by Israeli air strikes amid a flare-up of Israeli-Palestinian violence, in Gaza May 11, 2021. REUTERS/Ibraheem Abu Mustafa

LOD, Israel — Israel’s president warned of a civil war between the country’s Arabs and Jews on Wednesday as fury and fear over shelling exchanges with Palestinian militants in Gaza ignited violence in Israel’s streets.

Appeals by religious and political leaders for calm, and police reinforcements and mass-arrests, appeared to do little to stem riots in several ethnically mixed towns. Israeli TV showed what it described as “near-lynchings” of Jewish and Arab motorists.

The strife was touched off by sometimes violent pro-Palestinian protests by members of the Arab minority incensed at an Israeli air barrage launched on Gaza on Monday after Islamist Hamas-led militants fired salvoes of rockets across the border.

A synagogue and cars were torched in the Tel Aviv suburb of Lod, motorists were stoned on some roads, and Palestinian flag-waving protesters scuffled with police in northern Haifa port.

By Wednesday, police said the assaults appeared to be more by Jews against Arabs – including one seen on live TV as he was dragged from his car and pummeled by a mob in coastal Bat Yam.

The broadcast on the top-rated Channel 12 cut to a phoned-in appeal by President Reuven Rivlin to “please stop this madness”.

“We are endangered by rockets that are being launched at our citizens and streets, and we are busying ourselves with a senseless civil war among ourselves,” said the president, whose role is largely ceremonial.

Israel’s 21% Arab minority – Palestinian by heritage, Israeli by citizenship – is mostly descended from the Palestinians who lived under Ottoman and then British colonial rule before staying in Israel after the country’s 1948 creation.

Most are bilingual in Arabic and Hebrew, and feel a sense of kinship with Palestinians in the occupied West Bank and the Gaza Strip. They often complain of systemic discrimination, unfair access to housing, healthcare, and education services.

Israel’s domestic unrest has been welcomed by Hamas, one of whose spokesmen urged Arab citizens to “rise up” against “our enemy and yours”.

“We must not yield to this,” Odeh said on Twitter. “A common struggle by Arabs and Jews is the response to the violent vision of Netanyahu, (Itamar) Ben-Gvir and (Bezalel) Smotrich.”

Netanyahu, however, issued a video statement in which he pledged to grant police emergency powers for a crackdown.

“This violence is not who we are,” he said. “I don’t care if your blood’s boiling.”

In Lod, police imposed a rare night-time curfew. But Israeli media showed young Jewish men, some with bats, on the streets.

Ibrahim, an Arab councillor with the Lod municipality, said: “What is happening now is (an) uprising that is going on (in) cities like Ramle, Lod, Jaffa, Acre and Haifa”.

He called events in Gaza and in Jerusalem – where Israeli police have clashed with Palestinians and Israeli Arabs at a mosque during the Ramadan holy month – a “red line”.

“We condemn that our people’s solidarity and cohesion with our brethren in Jerusalem and the Gaza Strip is being channelled through acts of sabotage to public and private property,” said Samir Mahamid, mayor of the northern Arab town of Umm al-Fahm.

“We must not win the Gaza battle and lose at home,” he said.

Read Next
‘We are fed up’: Thousands pray at Portugal’s Fatima shrine for world without COVID-19
EDITORS' PICK
Metro Manila to remain under COVID Alert Level 2 until December 15
Legarda: Ending Violence Against Women, a cause for all
A delightful blessing!
Duterte open to making jabs mandatory; Cabinet mulls ‘pressuring’ the unvaccinated
IATF tightens border control, suspends entry of fully vaxxed nationals from ‘green’ countries
Villar Group gears up for AllValue Shopping Party on Dec. 3; around P 1-million promos and discounts up for grabs
MOST READ
Quiboloy warns of ‘much worse than Omicron virus’ if his ‘persecution’ is not stopped
Omicron poses ‘very high’ global risk, countries must prepare–WHO
Bongbong Marcos’ conviction in tax case not a crime involving moral turpitude — lawyer
Amid looming Omicron threat, Palace encourages use of face shields anew
Don't miss out on the latest news and information.