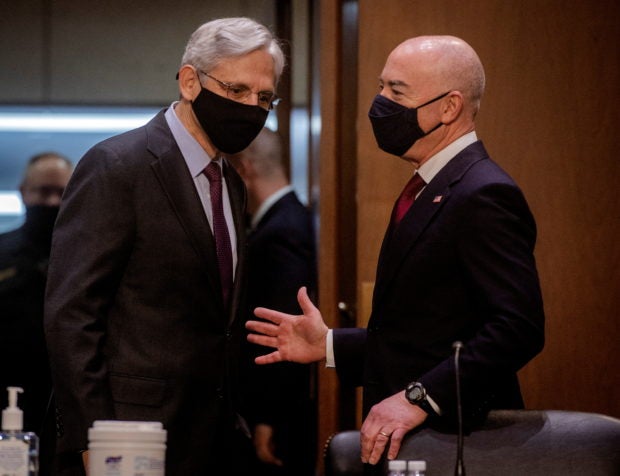 Attorney General Merrick Garland speaks with U.S. Homeland Security Secretary Alejandro Mayorkas as they arrive for a hearing on “Domestic Violent Extremism in America.” before the Senate Appropriations Committee on Capitol Hill in Washington, U.S., May 12, 2021. Bill O’Leary/Pool via REUTERS

“The threat of lethality is higher than it ever was … I have not seen a more dangerous threat to democracy than the invasion of the U.S. Capitol” by rioters on Jan. 6, said Garland, who as a prosecutor led the investigation into the 1995 Oklahoma City bombing that killed 168 people.

Garland noted the FBI recently said that the top domestic violent extremist threat facing the United States is from “racially or ethnically motivated violent extremists, specifically those who advocate for the superiority of the white race.”

Homeland Security Secretary Alejandro Mayorkas told the committee that racially or ethnically motivated extremists are “most likely to conduct mass-casualty attacks against civilians,” while people tied to right-wing militia groups are the most likely to target police and government employees and buildings.

The threat of attacks inside the United States by foreign militants such as Islamic State also persists, Mayorkas said. “It is not as if they have disappeared… We don’t take our eye off one to focus on the other,” he said.

Garland said the Director of National Intelligence’s office was monitoring “sharing of information” between U.S. and European extremists.

Mayorkas said that Homeland Security, whose leadership in the Trump Administration was accused by a whistleblower of playing down right-wing extremist threats, is devoting more intelligence resources to domestic extremism and allocating “at least $77 million” to help local governments prepare for “acts of domestic violent extremism.”