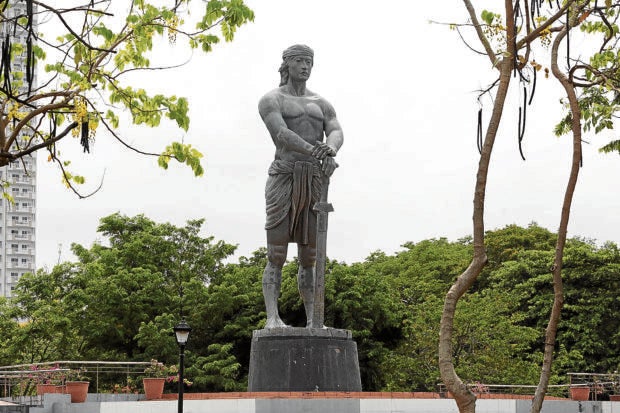 FIRST HERO A statue of Cebu chieftain Lapulapu, who led native warriors to victory in the Battle of Mactan in 1521, is given a special place at Rizal Park in Manila, the country’s premier park where the monument of national hero, Dr. Jose Rizal, stands. (Photo by GRIG C. MONTEGRANDE / Philippine Daily Inquirer)

CEBU CITY, Cebu, Philippines — Despite the National Historical Commission of the Philippines (NHCP) having clarified issues on the lineage of the warrior Lapulapu, President Rodrigo Duterte on Tuesday asserted that the Mactan chieftain was a Tausug from Mindanao.

In a speech during his visit in Camp Siongco in Maguindanao province, the President said: “I said then that when I become President, I will create our national hero. And I raised Lapulapu to the level and dignity of a true warrior, and he was Tausug…”

Lapulapu is considered the country’s first hero after his warriors defeated Portuguese explorer Ferdinand Magellan and his men at the Battle of Mactan on April 27, 1521.

“[Lapulapu] killed the first invader of our country. I am very proud of him. Talagang napagyayabang ko, kaya may medal (I can brag about his feat, that’s why there’s a medal). The medals that I give to my soldiers now are all Lapulapu awards for bravery,” Mr. Duterte said.

But a Cebuano historian challenged the President to prove his claim.

“The burden of proof is on the President. Why not present a proof that Lapulapu was Tausug? If we agree on talk alone, (that won’t matter),” archaeologist Jose Eleazar Bersales, director of the University of San Carlos Museum, told the Inquirer.

Bersales said the only existing primary source mentioning Lapulapu by name was the account of Antonio Pigafetta, the chronicler of the Spanish expedition led by Magellan 500 years ago.

“We, historians, have nothing to prove. Historical records showed that Lapulapu was the chief of Mactan (Island). I think it’s time for him (Mr. Duterte) to prove that the precolonial hero was a Tausug. This is a better opportunity to have a full research about the past,” Bersales said.

He said most of what is known about Lapulapu in recent times had been based on folk myths and legends.

The NHCP, through its chair, Rene Escalante, had clarified that the only account mentioning Lapulapu was from Pigafetta, who described him as Mactan’s chieftain. Pigafetta, Escalante said, did not provide any information on his birthplace or other details of his life.

During the 500th anniversary of the Battle of Mactan last month, Sen. Bong Go, Mr. Duterte’s closest confidant, also claimed in his speech that Lapulapu was Tausug.

The senator later apologized after historians lambasted his claim.