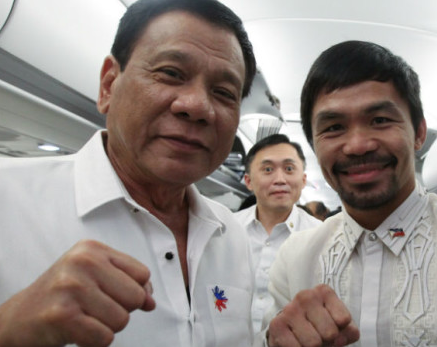 PDP-Laban executive director Ronwald Munsayac said Wednesday that party members who believe that Pacquiao was overly critical of Duterte, who serves as chairman of the party, should have followed internal mechanisms instead of making public declarations or issuing press releases.

“If you look at the said interview, you will realize that Senator Pacquaio was even defending the President when he said that people should not take the President’s ‘jetski statement’ literally. Senator Pacquaio said nothing to criticize President Duterte and in fact expressed his respect and admiration for what the President had stated in his ‘jetski’ bravado, by saying ‘ito, ‘yun gusto ko.’,” he explained.

Munsayac was reacting to the action of the PDP-Laban-Bulacan provincial chapter, which issued a statement on Tuesday, sending their strong disapproval of Pacquiao’s remarks that he found Duterte’s response to the West Philippine Sea issue ‘lacking’.

Pacquiao said on May 3 that he wished the President continued his stance against the Chinese intrusion over the disputed region, adding that it would be disheartening for people who followed him for his aggressive viewpoint.

“While the party leadership under Sen. Pacquaio is cognizant of the various sentiments of our members, there is a process by which we must all adhere before issuing public pronouncements that are detrimental to the interest of the party and its general membership,” Munsayac pointed out.

“As a fellow Partymate, I lament the fact that you have issued this resolution and press statement without any actual fact-checking and proper verification of the full context of Senator Pacquaio’s narrative,” he added.

According to Munsayac, the best move that the PDP-Laban-Bulacan chapter should have done was to consult the matter with him or Pacquiao.

“Any party member who has no other agenda but to uphold the integrity of the party could have easily communicated with me or to Senator Pacquiao so that we could have happily provided you with the full video of his interview where you claim that he criticized the president,” he said.

Malacañang, for its part, has issued a statement denying any falling out between Duterte and Pacquiao, even as chief presidential legal counsel Salvador Panelo took a jab at the world boxing champ-turned-legislator.

Pacquiao and Duterte have been allies since the President ran in the 2016 elections.