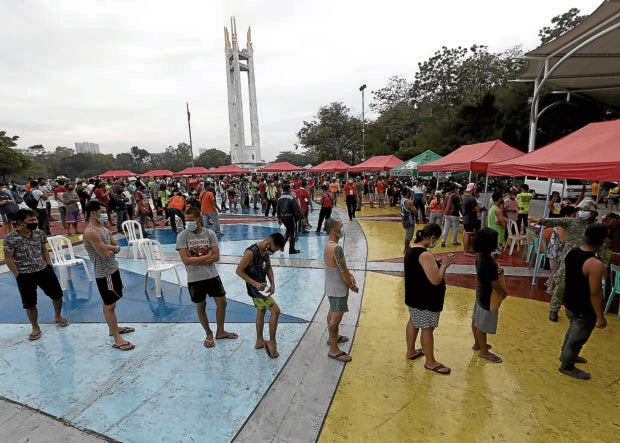 FILE PHOTO: Hundreds of individuals who were rounded up for not wearing masks and face shields in public in Quezon City are lining up to pay a fine of P300 each at the Quezon Memorial Circle on Friday, March 12, 2021. They were caught in a “one-time-big-time” sweep through various barangays in a bid to control the rapid spread of the new coronavirus SARS-CoV-2, which causes severe respiratory illness COVID-19. INQUIRER/RICHARD A. REYES

MANILA, Philippines — Amid the enforcement of “maximum tolerance,” a joint operation of police and city hall personnel has rounded up about 3,200 violators of health protocols in Quezon City.

Mayor Joy Belmonte said the violators came from the different barangays of the city and were brought to the Quezon Memorial Circle for proper documentation and some lecturing about safety protocols. She likewise said the violators were also given ordinance violation receipts (OVRs).

(This ‘One Time, Big Time’ operation was launched because many people still don’t follow health protocols. Nevertheless, we are still enforcing maximum tolerance and violators will be given a ticket.)

OVRs, which have corresponding penalties of P300, P500, and P1,000 for the first, second, and third offense, respectively, have to be settled “within a reasonable period,” according to the local government.

“If they fail to pay within the prescribed period, the City Prosecutors Office will file a case that will flag them once they apply for a police clearance for whatever purpose,” it said.

The operation was carried out by the Quezon City Police District, Department of Public Order and Safety (DPOS), Task Force on Transport and Traffic Management, Task Force Disiplina, and Market Development and Administration Department in the city’s 142 barangays.

DPOS head, retired Gen. Elmo San Diego, said the city has launched a similar operation in March when 1,700 violators were rounded up.

Read Next
4 Zambales children get coronavirus from grandma
EDITORS' PICK
Kai Sotto continues to inspire Filipinos by sharing his passions and stories with Smart Prepaid
1Sambayan to nominees: Stick to word of honor
Alex Eala wins Grand Slam on Independence Day: ‘I hope I made my contribution to the country’
Ahead of ONE: Full Blast II, Mongkolpetch warns Elias Mahmoudi: ‘Watch out for my fists’
Trust Robredo’s political instincts – Kaya Natin! convener
EDITORIAL: Good news, bad news
MOST READ
China cautions G7: ‘small’ groups don’t rule the world
1Sambayan to nominees: Stick to word of honor
Leni vs. Sara
Inday Sara to VP Leni: Keep off Davao City’s COVID-19 situation
Don't miss out on the latest news and information.