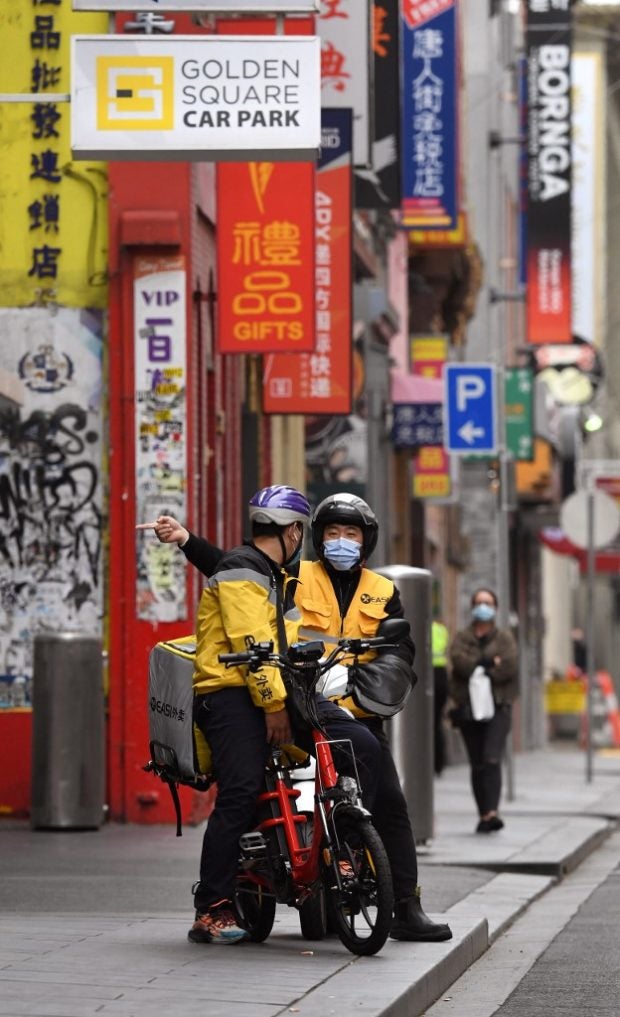 SYDNEY — Lockdown-fuelled demand for take-out meals has brought throngs of new delivery riders onto streets around the world, but in Australia the boom has also seen tragedy with a spate of road deaths highlighting the plight of couriers.

As many industries ground to a halt last year, millions lost their jobs and others were asked to work from home, 43-year-old Xiaojun Chen was among the legions of couriers who rushed out on the job.

The work was hard, the hours were long, and most of Chen’s pay went back home to China — but he was driven by a dream to send his 15-year-old daughter to university.

Food riders doubled the time they spent zipping around Australia’s streets in April and May last year as lockdowns were in force, according to data from one delivery service, Deliveroo.

Then on September 29, Chen collided with a bus while delivering food in Sydney. He later passed away in hospital — one of five couriers to die on Australian roads in just three months of 2020.

“My husband loved his life, looked forward to the future, and was kindhearted,” his wife Lihong Wei told AFP through tears.

His loss left Wei shaken and unsure how she would support elderly parents and two children alone.

Chen’s firm Hungry Panda paid for his funeral expenses and for his widow to fly to Australia, but his status as a contractor rather than a full-time employee has made further help unclear.

A Hungry Panda spokesman told AFP that, although it was not legally required to, the company was still discussing compensation over Chen’s death and was working to improve safety for riders through equipment and training.

The “gig economy” — using temporary “independent” workers for short-term tasks — has exploded since the launch of the Uber ride-sharing service in 2009.

Promoted as a flexible way for people to earn money without the constraints of a full-time job, gig work is the main source of income for many.

Sixty-one-year-old Steve Khouw, who has been riding for Deliveroo for more than four years, told AFP he started delivering for the platforms mainly for exercise, but found many of his fellow couriers needed the work to survive.

“These people hardly speak English, and are very much dependent on themselves for their daily living and to send back money abroad to their family,” he said.

Riders, who are paid by delivery, often feel pressured to rush to avoid bad reviews that can mean they are booted from a platform, Khouw added.

“They can’t afford not to work, to be suspended or to be terminated, you know, with no recourse. That to me is exploitation.”

Esteban Linares, who was injured while riding for Uber Eats, says the promise of flexibility disappears when you rely on the platforms for a living.

“It’s not as flexible as you might think because if we want to make a profit, we will always have to work at the peak hours,” Linares told AFP.

In recent years legal challenges to gig worker conditions have multiplied around the world, pushing back against the lack of employer-provided benefits like health insurance or minimum wage protections.

Earlier this year, Spain became the first country in the European Union to announce Deliveroo riders would be considered salaried staff, with France expected to announce proposals for delivery platforms soon.

“When people start getting killed out there and hospitalized that’s where we draw the line,” Menulog Managing Director Morten Belling told a hearing of federal parliament in Sydney.

“It doesn’t really matter if they’re being killed on the Menulog platform or another platform; we play in the same industry, and we don’t want to be part of that.”

The announcement was heralded as a “watershed” moment by Australia’s Transport Workers Union.

But Menulog’s Australian market share pales in comparison to Uber Eats which, according to research from IBISWorld released last year, claims nearly 70 percent of the sector’s revenue.

An Uber Eats Australia spokeswoman told AFP that the company continues to call for “sensible measures” to provide benefits and protections but wouldn’t follow Menulog as it would reduce the flexibility of working for the platform.

The company also said it provided “specialized insurance” for riders to cover injuries and income support for riders hurt on the job.

Similarly, Deliveroo said it was committed to improving conditions but blamed current industrial law for preventing it from providing increased benefits.

Khouw, working alongside the Transport Workers Union, is trying to negotiate better safety for riders at Deliveroo, but finds organizing isolated riders in a smaller market like Australia incredibly hard.

“We find that in Australia, we don’t have the same density of riders as, for example, in Britain,” he said.

But as a growing number of riders across the world meet online to share information, he hoped pressure from overseas would fuel change in Australia.

“It is paramount to let everyone know that we are not alone,” he said.

Read Next
Makati City starts dispensing Pfizer shots
EDITORS' PICK
SANTIS Delicatessen: The road to survival is sweet and savory
Gilas out to prove Korea win not a fluke; Tab fires back at ‘lucky shot’ remark
Piolo Pascual: The Ultimate Heartthrob continues to level up
Duterte to issue memo on face shields this week
LOOK: ‘Low vaccination’ turnout in 4 Manila sites after no walk-in policy
Eleazar: PNP open to ICC probe but PH judicial process is working
MOST READ
Duterte to issue memo on face shields this week
Palace: Face shields no longer needed to be worn outdoors
DFA opening 10 satellite offices to boost passport services
Lacson or Pacquiao a possible presidential candidate for NPC – Sotto
Don't miss out on the latest news and information.