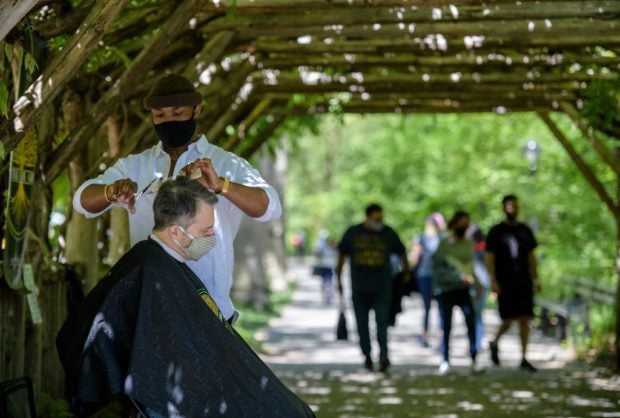 Barber Herman James cuts a clients hair under a pergola in Central Park on May 6, 2021, in New York City. Shortly after coronavirus shut down New York last spring, Herman James picked up his clippers, headed outside and found himself a new identity: the Central Park barber. A year on, business is good for the 33-year-old as the famous Manhattan green space’s newest attraction — its one and only hairdresser. Photo by Angela Weiss / AFP

NEW YORK — Shortly after coronavirus shut down New York last spring, Herman James picked up his clippers, headed outside and found himself a new identity: the Central Park barber.

A year on, business is good for the 33-year-old, the latest attraction and only hairdresser in Manhattan’s green lung, renowned for its musicians, roller discos and birds.

“I love it, being a trendsetter and having a monopoly,” says James at his new “shop” — a foldable chair under a leaf-covered pergola near the Strawberry Fields John Lennon memorial.

After a 45-minute subway ride from his Brooklyn home, James opens his wheelie suitcase, removes scissors, mirror and comb and hangs them on hooks in the wooden pergola that overlooks the boating lake.

He lines up hair products on the ground and drapes a gown over the chair. There’s no red, white and blue-striped pole but he unfurls a banner that reads “Central Park Barber: Complimentary Haircuts!”

James started offering free haircuts in the park in May 2020 after pandemic restrictions temporarily closed all non-essential businesses in New York, including the shop where he was working.

He hoped the cuts would give New Yorkers a lift during a difficult time and was confident locals would show their appreciation through donations.

“I decided to pretty much just take the initiative,” says James, recalling his venture outdoors.

“I grabbed my chair, my tools, and I put them on display. I just laid it out to see how people would respond. About ten minutes in a guy came over and sat down.

“Once people saw he was getting a haircut, everybody pretty much gravitated over. It was 90 days into the pandemic and everyone was in dire need!”

James’ foray initially caused some confusion among park authorities, but they have allowed him to stay.

“This was the first time they ever had to do with something like this before. There were no permits or application. They didn’t know quite what to do with me,” he remembers.

Demand, coupled with local news coverage, has seen James, a barber since 2010, become a permanent fixture.

“It’s very cool. I would do this all the time if I had enough hair,” said 72-year-old Joel Linchitz, receiving a trim last Thursday.

Customers can book via the Schedulicity app; walkers and runners regularly just drop in. James cuts women’s hair provided they don’t want anything complicated “like layers.”

“To be outside amongst nature and have people passing by taking pictures, it’s a brand new experience that people really enjoy,” he says.

“Also, it’s much safer. It’s less of a risk than being indoors. There’s fresh air that can circulate.”

Another perk: no overhead costs, which James describes as “a real blessing.”

Cons include rain: the forecast dictates his schedule and he doesn’t work during winter.

Since his chair doesn’t move up and down, snipping children’s hair puts some stress on his back.

James also can’t plug in a hair dryer but says sun and the park’s pleasant breeze does a “good job.”

What does he do with the cut hair?

“One of my clients gave me a dustpan and a small broom. I sweep it up and just dump it right in the trash,” he explains.

Hair salons reopened last summer but James has no plans to return indoors.

“The demand is still alive. And I’m the first in history. To go from that back to building someone else’s brand is not something I’m interested in doing,” he says.