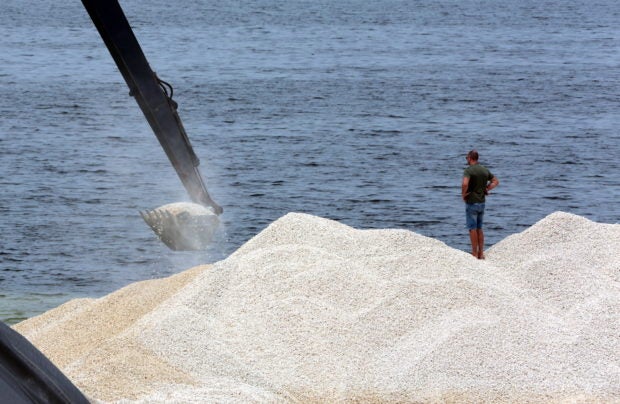 MANILA, Philippines — Funds earmarked to create a “white sand beach” along Manila Bay can instead be used to finance the replacement of trees that will be uprooted to give way to the planned construction of a mega vaccination center at the Nayong Pilipino Foundation (NPF) property in Parañaque City.

This was the proposal of Senate President Pro Tempore Ralph Recto on Wednesday as he backed the projected mega vaccination center in Nayong Pilipino, saying the lot on which the facility will stand “will be used for a facility that will protect millions of lives.”

“The DENR’s budget for Manila Bay’s rehabilitation,” the lawmaker explained in a statement, “can bankroll a mangrove planting project, which many experts argue is a better rehabilitation material than imported sand.”

(If they can plant sand on the shores of Manila Bay, why can’t we plant mangroves in the area? For every ipil-ipil tree cut on the Nayong Pilipino lands, they can fund a replacement of 100 trees.)

Recto likewise said the NGP’s P3.158 billion budget, as computed by DENR, will be good for 44.6 million seedlings.

“DENR’s mega billions for NGP can fund the establishment of a green belt in the area, including mangroves as the latter is in NGP’s approved menu of projects,” he pointed out.

“Or it can reforest a wide swath of the denuded Marikina watershed in honor of the Nayong Pilipino trees which were sacrificed so people may live,” he also said.

While Recto acknowledged that trees in the Nayong Pilipino property serve as “urban lungs”, the senator stressed that the facility that will be built “serves the same purpose” which is “to protect people from getting COVID so they won’t be gasping for air on the driveways of overwhelmed hospitals.”

“On a per square meter basis, the property will benefit thousands of people. It is a social project that packs enough ‘goodwill density’ to justify the lot being used to meet a public emergency,” he said.