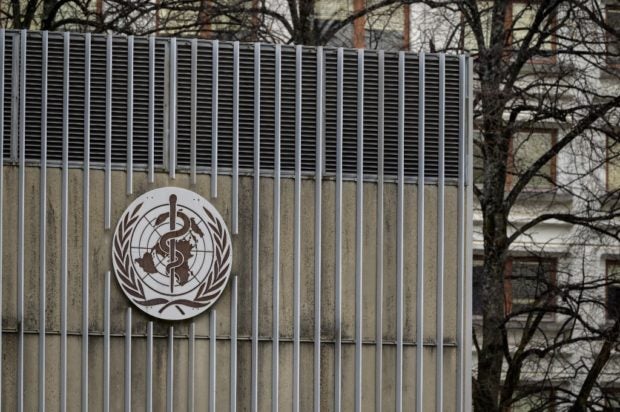 This photograph taken on March 5, 2021 shows the sign of the World Health Organization (WHO) at their headquarters in Geneva amid the Covid-19 coronavirus outbreak. Photo by Fabrice COFFRINI / AFP

GENEVA — The World Health Organization said Wednesday that a variant of Covid-19 behind the acceleration of India’s explosive outbreak has been found in dozens of countries all over the world.

The UN health agency said the B.1.617 variant of Covid-19, first found in India in October, had been detected in more than 4,500 samples uploaded to an open-access database “from 44 countries in all six WHO regions”.

“And WHO has received reports of detections from five additional countries,” it said in its weekly epidemiological update on the pandemic.

Outside of India, it said that Britain had reported the largest number of Covid cases caused by the variant.

Earlier this week, the WHO declared B.1.617 — which counts three so-called sub-lineages with slightly different mutations and characteristics — as a “variant of concern”.

It was therefore added to the list containing three other variants of Covid-19 — those first detected in Britain, Brazil and South Africa.

The variants are seen as more dangerous than the original version of the virus because they are either being more transmissible, deadly or able to get past some vaccine protections.

The WHO explained Wednesday that B.1.617 was added to the list because it appears to be transmitting more easily than the original virus, pointing to the “rapid increases in prevalence in multiple countries”.

WHO also pointed to “preliminary evidence” that the variant was more resistant to treatment with the monoclonal antibody Bamlanivimab, and also highlighted early lab studies indicating “limited reduction in neutralization by antibodies”.

It stressed, though, that “real-world impacts” on the effectiveness of vaccines against the variant for instance “may be limited”.

WHO said the spread of B.1.617, alongside other more transmittable variants, appeared to be one of several factors fueling India’s dramatic surge in new cases and deaths.

India — a country of 1.3 billion people — is the world’s second-most infected after the United States with nearly 23 million Covid-19 cases, and is currently recording more than 300,000 new cases and close to 4,000 deaths each day.

The new surge in cases has ravaged major cities, including the capital New Delhi and financial hub Mumbai, pushing hospitals to breaking point and leading to severe shortages in oxygen and beds.

“WHO found that resurgence and acceleration of Covid-19 transmission in India had several potential contributing factors, including increase in the proportion of cases of SARS-CoV-2 variants with potentially increased transmissibility,” it said.

It also pointed to “several religious and political mass gathering events which increased social mixing; and, under-use of and reduced adherence to public health and social measures”.

“The exact contributions of each of these factors on increased transmission in India are not well understood.”

WHO stressed that so far, only 0.1 percent of positive Covid tests in India had been genetically sequenced and uploaded to the GISAID database to identify the variant in question.

In addition, other more contagious variants are also spreading in the country, including B.1.1.7, which was first detected in Britain.