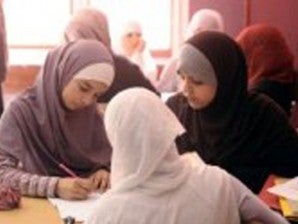 MANILA, Philippines – IMAGINE high school students discussing Buddhism, Christianity or Islam. It is not a typical religion class where they are just taking notes while a religion teacher lectures. Thanks to videoconferencing, they are chatting not just with their classmates, but with students in countries as far away as the United Kingdom, Egypt and India.

Welcome to Face to Faith, an innovative curriculum initiated by the Tony Blair Faith Foundation that seeks to promote religious literacy and understanding among the world’s youth. Tony Blair is the former UK prime minister.

The program was already active in 15 countries after 9/11 but not in the Philippines. Why not? That was the question in the mind of Fr. Johnny Go, SJ, president of Xavier School, after he stumbled over the Tony Blair Faith Foundation website last year.

Always on the lookout for innovative programs, Go e-mailed the foundation to ask if it had plans of launching the program in the Philippines. Program manager Leila Walker promptly said yes, and would Xavier organize an introductory meeting with school heads in the country?

In September 2010, Ian Jamison and Simmi Kher of the foundation came to Manila and met with a group of 89 educators.

“We’re usually happy when we get 20 in these meetings,” Jamison quipped.

Those in attendance included administrators of 38 public and private schools from all over the Philippines, and representatives of the Departments of Education and Foreign Affairs. Schools included Ateneo de Manila, Poveda, Assumption College, and La Salle Green Hills, as well as some international schools. There were also administrators from the Visayas and Mindanao.

The participants’ enthusiastic response convinced Jamison and Kher that the country was ready for a teacher training workshop to launch the program.

Xavier was designated lead school in the Philippines, and Go was invited to the coordinators’ conference in Dubai, where he met his counterparts from countries like the UK, United States, India, Pakistan, Egypt, Syria, and the Palestinian Territories.

Go and other coordinators had the chance to meet Blair himself and present their country plans.

“The great divide in today’s world is not between the haves and have-nots,” Blair explained the rationale of the program. “Rather, the great divide is between those who are open-minded and those who are closed-minded.” The founder of Face to Faith said understanding among the different religions was key to world peace.
Introduction to Faith
Two months later, over 40 teachers and school administrators had their first Face to Faith Teacher Training Workshop at Xavier.

The program posed the following questions: “In what way is religious faith important in the world today? How can it be a force for the good in one’s own life and in the world? Why dialogue—and how?”

Participants watched clips of actual student video conferences. Conducted by Kher, program consultant from India, the two-day workshop began with a Skype session with Brian Garrone of Australia, who discussed his experience with Catholic schools. In her own sharing, Kher talked about a “breakthrough” video conference between Indian students and Pakistani students who started the session with stereotypes about one another and some hostility, only to realize that they had many more things in common than they had been led to think.

Another Skype conference featured Linda Lentz in Indianapolis who explained the technical aspects of video conferencing in user-friendly language.

Participants engaged in cooperative learning activities and experienced firsthand the student-centered approach of the Face to Faith curriculum. They were also introduced to the online community, where teachers and students blog about their experiences and their insights.

The workshop allowed teachers to see how the program hoped to help students speak meaningfully, respectfully and appreciatively about different religious traditions, including their own.

Now in 17 countries, Face to Faith continues to promote inter-religious dialogue and understanding among the young today.