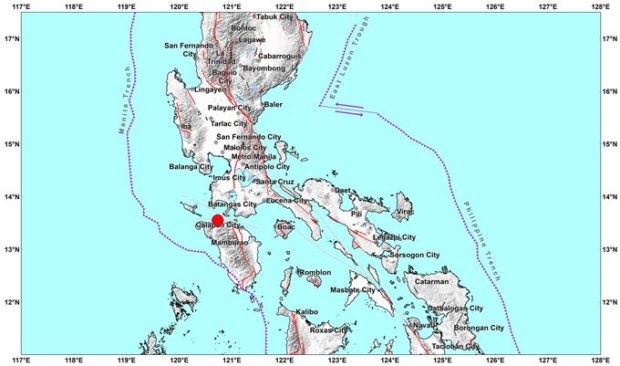 MANILA, Philippines — A magnitude 5.8 earthquake struck off Mindoro island Wednesday morning and was felt in parts of Metro Manila and Southern Luzon.

The Philippine Institute of Volcanology and Seismology said the quake which occurred at 9:09 a.m. centered 11 kilometers northeast of the town of Abra de Ilog in Occidental Mindoro. It had a depth of 11o kilometers.

There were no immediate reports of damage or injury from the earthquake that  lasted for a few seconds in several intervals.

Undersecretary Renato Solidum, Phivolcs director, said the earthquake, which was tectonic in origin, was caused by the movement along the Manila trench.

(Because of its depth, more areas felt the earthquake, like in Mindoro, Calabarzon area, even Metro Manila.)

In a separate report, PHIVOLCS reported that Intensity V was felt in Lubang Occidental Mindoro; Calamba City in Laguna; and Calaca, Batangas.

Solidum said that the quake is unlikely to cause damage, while he also ruled out the threat of a possible tsunami.

(There is no threat of tsunami. So far, the areas affected by the earthquake have only reported intensity four, if that’s the case, then we are not expecting any damage.)

Solidum added that aftershocks are possible but they also won’t expect it to be damaging.