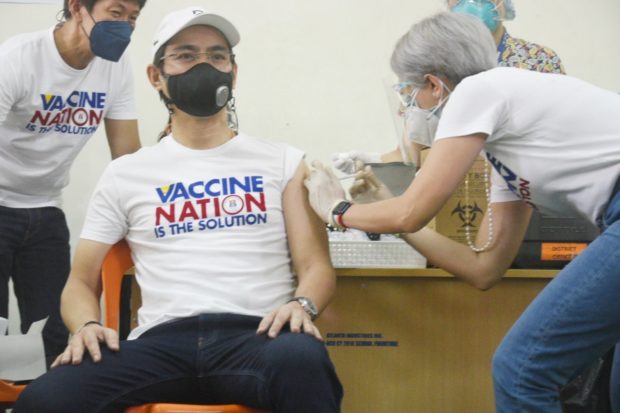 Manila Mayor Francisco “Isko Moreno” Domagoso gets vaccinated with CoronaVac on Sunday, April 4, 2021. Vice Mayor Honey Lacuna-Pangan, who is a physician, administered the vaccine to him. (Photo from the Manila Public Information Office)

In a late-night briefing on Tuesday, Moreno stressed that vaccines stored in the national government’s facilities have yet to reach big and densely-populated cities like Manila —  the national capital that also happens to be a vital cog in the economy.

“I don’t know if they’re still letting the vaccines grow inside their refrigerators. That I  don’t know. There must be somebody who’s going to be liable because if you believe that vaccination is the solution to restart the economy, to bring back normalcy to people’s lives, the vaccines should not be stored for so long in different warehouses,” Moreno said, speaking partly in Filipino.

“Now, for those who want to get Pfizer, we were just discussing and planning a while ago because the vaccine supply seems unreliable. The global supply is unreliable, and it’s unreliable here because it’s so slow. I’m telling you now: The deployment is not slow, it’s superslow,” he said.

Moreno also urged his constituents to avoid being swayed by press releases that vaccine distribution was being done quickly. He said Manila — supposedly one of the major cities prioritized in the vaccine rollout — has been receiving meager amounts of vials.

According to him, out of one million vials of CoronaVac, the vaccine from Chinese firm Sinovac Biotech, that arrived late April, only 8,400 was allocated for Manila.  It has not received its share from the latest CoronaVac shipment.

“It’s important for you to know that the 4,200 left [of CoronaVac] I’m reserving for the second dose,” Moreno said.

Of the Pfizer vaccines, Manila only received 1,170 vials, which would be good for 7,020 doses.

“We have been receiving a lot of text messages, but these are just texts. Do not believe people doing press releases that vaccines will be delivered here or delivered there. We have also been receiving text messages from that particular agency, but that is not true. Up to now, we have not received any,” he said.

The government is banking on COVID-19 vaccines to help restore normalcy and move the economy after going through the worst recession in 2020. Vaccines are also expected to curb the recent COVID-19 surge which saw active cases balloon to over 200,000 during its peak in April.

The Philippines has already received over seven million vaccine vials, but only around two million individuals have gotten at least their first dose as of Tuesday.

Moreno is perplexed about the slow distribution.

“Why it is taking so long? I don’t know,” he said. “I can believe it if the release is two to three days upon receipt because there are processes to be followed, analyses, and so on and so forth. But it didn’t happen the first time,” he said.

“I don’t know why. I don’t know how o what the policy is or whatever. But remember Manila is one of the densest, if not the densest, cities in terms of population per square kilometer,” he added.

The nationwide count of active case count has continued to go down, receding to 56,752, as of Tuesday. However, vaccinations remained very important since the active case count is still higher compared to the situation before the surge hit Metro Manila and the four adjacent provinces of Bulacan, Rizal, Cavite, and Laguna.