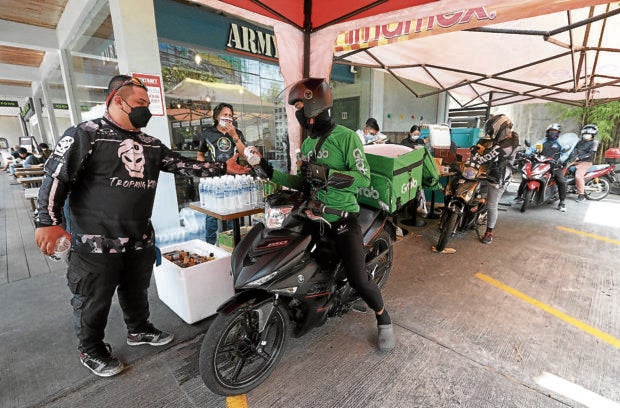 NEW BREED OF BREADWINNERS A community pantry is set up on Jupiter Street, Makati City, especially for food delivery riders in this May 7 file photo. —MARIANNE BERMUDEZ

MANILA, Philippines — In 2018, online food delivery platforms made $24 million in revenues in the Philippines, according to international research firm Statista.

Lalafood and Grabfood entered the local market that year, and revenues grew to $40 million in 2019.

Statista’s eServices Report said revenues made through food delivery apps also rose last year to $69 million. This is expected to climb further in 2021 to $94 million.

In 2020, food delivery riders became front-liners in the war against COVID-19. Lalafood called them “heroes” in one company post.

But being hailed a hero does not necessarily mean being treated like one. Rider “Jerome,” who delivered food under Lalafood for eight months, said he’d bring home P150 a day, including tips, despite being online the whole day.

The daily minimum wage in Metro Manila, where he worked, is P537.

Apps have different ways to compute what they pay their riders. Nothing stops them from paying below the minimum wage, because independent contractors are not entitled to it.

In Lalafood, which went offline on Feb. 15, a rider earned from the P49 delivery fee for every order, which went on top of an additional but small fare for every kilometer he or she took. Lalafood then got a 20-percent commission from each delivery fee.

A company post explained the payments: Reaching 2 kilometers got a rider an additional P2, for example. If this reached 3 km, they get another P2, and so on.

But the app measured distance with a literal straight line from the merchant to the customer, not including the streets a rider would take.

In a sample computation showed by Lalafood in the post, a delivery from Mandaluyong City to Maginhawa Street in Quezon City has a driving distance of 10.1 km. But its straight-line distance is 7 km. In this case, a rider got paid for 7 km even if he actually rode 10 km.

Lalafood said it used this measurement to encourage more customers to use the app, noting that more orders would mean bigger pay for riders. But it assumed that there would be many orders.

The data suggest that Lalafood lagged behind the competition. In a June 2020 survey by Rakuten Insight Global that covered 16,400 respondents in the Philippines, it placed a far third in terms of demand.

The respondents were asked to, among others, pick two food delivery apps they used most; 65 percent and 60 percent chose GrabFood and Food Panda, respectively, and Lalafood, 7 percent.

Arnold de Vera, who teaches labor law at the University of the Philippines and Ateneo de Manila University, said an employer-employee relationship would entitle a rider to at least a daily minimum wage— a safety net currently absent for all riders of food delivery apps.

“The usual approach of the law is it does not regulate everything. The system now is a regulation of the minimum,” De Vera told the Inquirer, noting that apps still have room to keep their fare structures competitive.

“It’s okay for [digital platforms] to have their own system of rates because that’s part of the competition to attract riders to their app. But it should not be below the [minimum wage],” he said.

But some riders are luckier than others, even without an employer-employee relationship. For example, GrabFood, which holds a huge chunk of the market, pays its riders much more than Lalafood did.

Per its website, GrabFood has a delivery fee of P49 from which it gets 20 percent as commission. But the rider will get an additional P15 for every km regardless of distance or time of day.

“Peter,” a GrabFood rider since 2018, said he’d take home P800 on a normal day even after deductions for fuel and loans.

All about hard work

“The competition here is really about hard work,” Peter said in a phone interview last month. “I’ve experienced what it was like to earn minimum wage every day. Here, it’s above minimum wage as long as you’re hardworking.”

Still, things could be better for riders. De Vera said ensuring at least a daily minimum wage for them would “address the [algorithmic] bias,” in which computer systems could, for one reason or another, put a specific group at a disadvantage.

While De Vera admitted that regulating the industry could be complicated, he said the most viable option is to set a minimum wage “for every day they are employed.”

It’s difficult to peg the number of active online food delivery riders with the apps not sharing figures on the size of their workforce.

Said Food Panda in an email to the Inquirer: “As a food delivery platform, we are able to provide flexible yet reliable earning opportunities for freelance riders. As these riders are valued partners … we provide them with what they need to be able to do their work well and safely.”

Through a representative, Lalafood emailed in February that it had decided to focus on Lalamove, which it said continued to grow despite the pandemic.

It said riders were welcome to transfer to Lalamove. But this possibility was open only to those with motorcycles, but not to bicycle riders like Jerome.

GrabFood, which declined to be interviewed for this report, had 20,000 riders as of February 2020, according to a previous interview with a former company head.

But that was before the world’s longest quarantine, which left 4.5 million jobless Filipinos in 2020, or an unemployment rate of 10.3 percent— the highest in 15 years, as shown by data from the Philippine Statistics Authority.

“The current issue on the lack of labor protection provided to delivery app riders deserves an urgent examination particularly by legislators and the Department of Labor and Employment. Unfortunately, such increased necessity has not led to increased protection for the riders—arguably the most important players in such industries,’’ said Mario Cerilles Jr., a lawyer who holds a master’s degree in law and technology.

“While our Labor Code provides robust protection to laborers, there is a glaring lack of clarity in existing laws and regulations on whether riders may in fact be considered employees. For instance, the biggest delivery apps demand certain standards of professionalism from their riders. Such demands may be construed as control, the presence of which is vital in determining whether there is an employer-employee relationship between a company and an individual,’’ he said.

On the other hand, regulations such as Memorandum Circular No. 2015-015 of the Land Transportation Franchising and Regulatory Board have categorized drivers accredited by Transportation Network Companies (TNCs) as mere independent contractors—a categorization which may disqualify riders from benefits that are allowed only to employees, Cerilles explained.

“It may be argued that the drafters of our Labor Code, a law that was enacted in 1974, may not have envisioned the proliferation of delivery apps. Clearly, the rise in the use of technology has made it difficult to apply certain legislations in existence today,’’ he said.

Still, the market continues to see new players, such as Pick.A.Roo of business tycoon Kevin Tan, and Dingdong PH of actor Dingdong Dantes.

Per their websites, the two new apps have rider provisions similar to those of the existing players.

An app called Toktok was also launched last year, but its terms and conditions are not publicly available.

“[We] don’t want another app to end up like Lalafood, wherein they would close and then just leave the workers on their own,” said Romeo Maglungsod, spokesperson for the Kapatiran sa Dalawang Gulong (Kagulong).

Maglungsod said Kagulong is an alliance of rider groups with some 500 members who mostly use motorcycles.

Regardless of employment status, riders in the gig economy should receive compensation upon retrenchment, said Maglungsod, who once worked for Lalafood.

“The problem is that because they have a loophole, there’s nothing you can demand,” he said in Filipino. “You can’t demand separation pay. That’s what we’re pushing for. Even if we are gig workers, there should be some compensation [after retrenchment], the same benefit that anyone who served in the company would get.”

Maglungsod bewailed the absence of a “law that could support our demand.”

“That’s what we want to change little by little … as the Kagulong riders organization,” he said.