Farmer-leader survived Palparan, but not COVID

‘Ka Joseph’ arrested in Pampanga during ‘huli week’ crackdown on activists in March; he contracted the virus in jail
By: Tonette Orejas - @ttorejasINQ
Philippine Daily Inquirer / 04:35 AM May 12, 2021 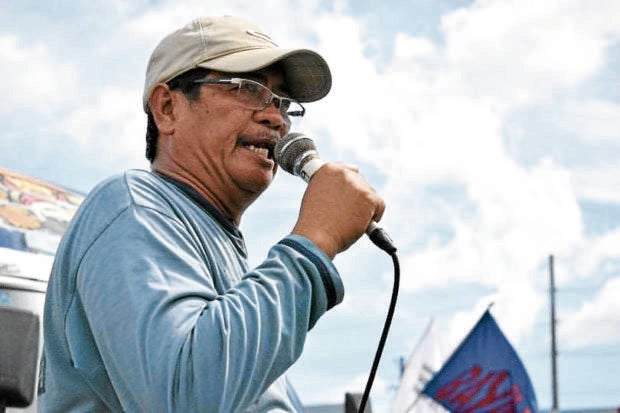 CITY OF SAN FERNANDO—Jenelle Buan remembered that her father, Joseph Canlas, was seldom at home when Maj. Gen. Jovito Palparan Jr. commanded the Armed Forces of the Philippines’ 7th Infantry Division from Fort Magsaysay in Nueva Ecija in 2005.

Canlas stayed under the radar to escape Palparan’s rabid campaign against communists and activists who he considered one and the same.

In his case, Canlas organized farmers for Alyansa ng Magbubukid sa Gitnang Luzon (AMGL), which he chaired in over a decade.

“My father made up for his absence by making phone calls to me and my brother or by sending us text messages,” Buan, 33, recalled.

She said it was ironic that her father survived the anti-insurgency drives of Palparan and other military generals but not the new coronavirus disease (COVID-19). Canlas, a veteran of many agrarian reform and food-for-all campaigns, died on Tuesday morning.

Bayan Muna Rep. Carlos Isagani Zarate said Canlas should not have been infected with COVID-19 if he was not Red-tagged and subsequently arrested for alleged illegal possession of firearms and explosives on March 30.

According to the CIDG, Canlas was arrested after a search inside the AMGL office yielded several guns and grenades.

Pol Viuya, chair of Bagong Alyansang Makabayan (Bayan) in Central Luzon, was also arrested on the same day in a house in Bamban town, Tarlac province, and was held in Camp Macabulos in Tarlac City.

Militant groups described these police operations as “huli (arrest) week,” carried out during the Holy Week.

Buan said their family was not given access to Canlas while he was detained in Camp Olivas.

She said food, toiletries and medicines for diabetes and hypertension were left at the main gate. Police guards had promised them that these would be delivered to her father.

Canlas was eventually transferred to the Bureau of Jail Management and Penology (BJMP) detention center in Angeles City.Supt. Rebecca Tiguelo, the jail warden, said Canlas showed no signs and symptoms of COVID-19 within the 14-day quarantine period following his entry on April 15.

“For 14 days, [the quarantined persons] were monitored by our duty jail nurse. [Canlas] was not taken for granted. Appropriate health care was extended to him,” Tiguelo told the Inquirer in a phone interview.

Tiguelo said Canlas talked to his daughter by video call at 5:37 p.m. on May 8.

At 8:05 p.m. that day, she said Canlas was taken to Rafael L. Lazatin Medical Center, also in Angeles, “due to low level of oxygen saturation but still not complaining [of] any pain or difficulty of breathing.”

Buan said her father was transferred to Jose B. Lingad Memorial General Hospital (JBLMGH) in this capital city at 4:30 a.m. the following day. He was accepted for confinement at COVID-19 critical care unit five hours later, she said.Dr. Monserrat Chichioco, JBLMGH medical director, said Canlas was intubated and hooked to a ventilator. On May 10, she said Canlas’ status “did not look good.”

Chichioco said Canlas’ immediate cause of death was “acute respiratory failure” after severe pneumonia. He said Canlas was a confirmed COVID-19 patient and had upper gastrointestinal bleeding.

Zarate called the death of Canlas a case of “silent EJK (extrajudicial killing).”

“He was not even tested for COVID-19 when he was in quarantine even if the BJMP knows that Ka Joseph had hypertension and diabetes, which makes him more vulnerable to COVID infection. He was only brought to the hospital when it was too late,” Zarate said in a statement.

“We hold the NTF-Elcac (National Task Force to End Local Communist Armed Conflict), the BJMP and the Duterte administration responsible for the death of Ka Joseph,” Zarate said.

He added: “Charges must be brought against those who caused his untimely death. We must also take note and be wary of what happened to Ka Joseph as it may be another modus, a form of ‘silent extrajudicial killing’ via COVID-19.”

Edre Olalia, president of the National Union of Peoples’ Lawyers which handled Canlas’ case, said: “This is entirely all on you who were all part of the whole contrived process of snatching away an innocent farmer leader.”

“We curse that you live with that thought for the rest of your life,” he added.