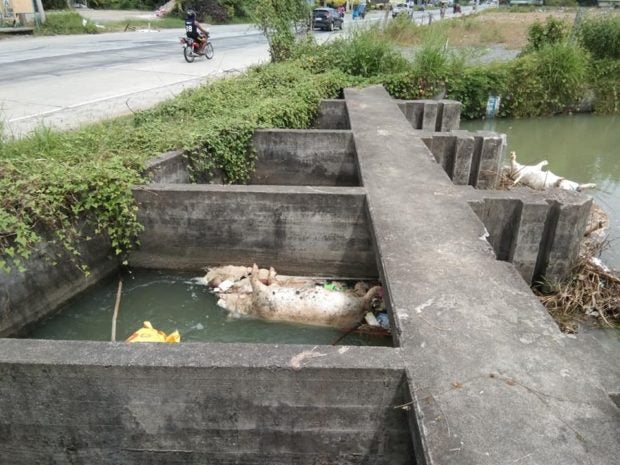 FILE – Dead pigs believed to have died of African swine fever (ASF) are dumped in an irrigation canal in a subdivision in Ramon town, Isabela province, which is reeling from an outbreak of ASF. CONTRIBUTED PHOTO

MANILA, Philippines — After the African swine fever was declared a national calamity, two senators called on the Department of Agriculture to take immediate action to eradicate the disease that is crippling the domestic hog industry.

“Now the real work begins. This is the declaration of war against ASF that pig farmers have long been waiting for. Recognizing that there is a calamity is one thing, ending it is another,” Senator Joel Villanueva said in a statement Tuesday.

This comes shortly after President Rodrigo Duterte declared the country in a state of calamity due to the ASF outbreak until the end of the year, almost two months after the Senate adopted a resolution asking for such a change.

“Hopefully, this declaration will prompt the government to move as one, marshal all resources available, and work on a timetable that results in quick victory,” Villanueva added.

As for Senator Francis Pangilinan, he said the President’s proclamation is a “marching order” to DA to act faster in countering the ASF outbreak and helping local hog raisers.

(The declaration, which is already out…this is the marching order. It’s clear that we have a calamity among the local hog raisers, which needs to be addressed more quickly.)

The senator hailed the President’s move, even as he said that Duterte should have declared the state of calamity at an earlier time.

(As they say, we may be late, we can still catch up. How we wish it were earlier, but we are still thankful because now the national government has a basis to spend more funds to support our domestic hog raisers.)

Pangilinan, a former presidential assistant for food security and agriculture modernization, said the declaration of the state of calamity allows extra funds to be accessed to help hog raisers recover from the ASF outbreak as it would provide a legal basis for concerned agencies to tap into the government’s calamity funds.

(This is important for us to augment the government’s support and assistance to eradicate the ASF. Because right now, the private sector is the one that’s really struggling. The government will now step in with additional funding. The DA can also use its Quick Response Fund.)

The DA said earlier that it needs about P6 billion more to boost its ASF budget of P2.6 billion.

Meanwhile, Villanueva urged the DA to write down a “game plan” on how it will implement the objectives of the declaration.

“The DA should now regularly update the public on what interventions are being done pursuant to this declaration,” he said.

“If the local hog industry were a patient in the ICU (intensive care unit), it is then the duty of the DA to display the patient’s chart so the country would know if progress is being made and recovery is underway,” Villanueva added.